Man – it just keeps snowing back home (not the usual winter weather in Seattle environs) and each day here in our Mexican February home-away-from-home continues to dawn with the promise of golden sunshine, blue skies and almost sizzling temperatures in the high 80’s. And we like getting our walk on before all of those sweat inducing components exponentially multiply our own locomotion generated perspiration! So today we hit the new highway which we discovered last year days before it was officially opened. 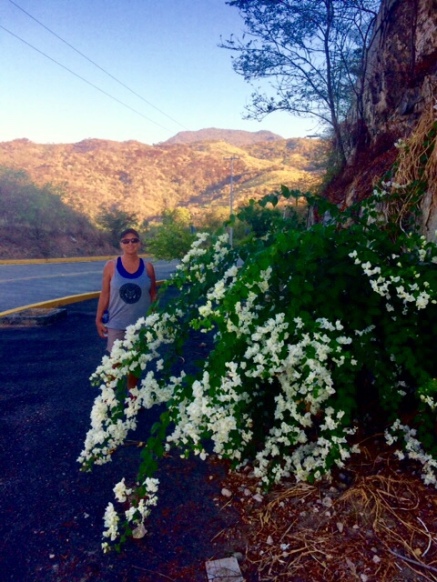 The Zihuatanejo-Ixtapa area of Guerrero, Mexico has opened two new stretches of highway linking resort towns along the Pacific coast and also the regional airport. As for the hillside road to the airport, “Governor Héctor Astudillo Flores described the former seven-kilometer stretch as one of the most beautiful highways in the country and said that without a doubt it will give Zihuatanejo a new boost in the tourism sector.’ The airport road is nine kilometers long and will benefit an estimated 6,850 residents. The governor also explained that the federal Secretariat of Tourism will announce on April 15 whether Zihuatanejo has been accepted as a pueblo mágico(magical town), a status that could also increase visitor numbers.” (www.mexiconewsdaily)

I don’t know what the elevation gain amounts to, though if it looks steep and it feels steep – it IS steep. I guess I would say it’s steep!!! The views back to the bay and also over to Playa Larga and Playa Blanca are stunning and worth our efforts. The road is officially accessible to vehicles, yet we only saw six, less than the handfuls of other walkers and a couple of determined cyclists we encountered. There are no buildings and though on pavement, it still feels like being in the middle of a jungle! We heard and saw a myriad of birds, including several parrots, and also heard a Pygmy Owl. Bill employed the whistle utilized by our friend Belem last week and succeeded in wooing it closer – just not near enough to actually see. Just a little over ninety minutes and we had 4.6 miles behind us. 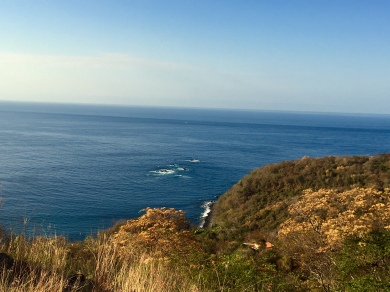 Breakfast at our casa preceded another day of kicking back and who can argue with that? I can still find plenty to “do” while “lounging” anyway. Maybe Next Week I will find the state of “be” instead of “do”. Don’t bet on it… 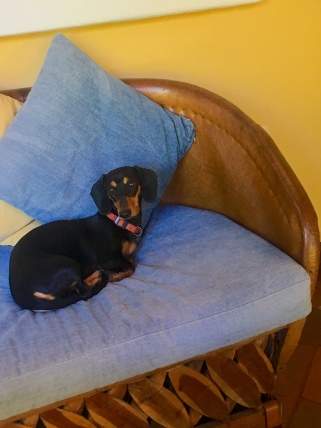 I fell In Love with pasole the first time I came to Zihua in the late 90’s and my love affair continues to this day (though dang, it’s pretty much NOT Keto friendly). “Pozole, which means ‘hominy’, is a traditional soup or stew from Mexico. It is made from hominy, with meat, and can be seasoned and garnished with shredded cabbage, chile peppers, onion, garlic, radishes, avocado, salsa or limes.” (Wikipedia) Thursday is the traditional day to eat pozole in the state of Guerrero and Pozoleria Santa Prisca is touted as THE place to be! Named after the cathedral in Taxco, it’s a bit outside the walking Zihuatanejo corridor and almost hidden in what looks like a garage. Open only Thursday from 1pm to 8pm and if one wants to ensure snagging a seat, getting there around noon is a stellar idea! Luckily for us, Temo, our preferred fishing panga captain, obtained reservations for he and his wife, Bob and Dallas and we two at 4:00. Live music by Juanito Zihua, and his three musician colleagues adds to the festive atmosphere already established with crowded community seating at picnic tables packed with local families, the preferred pitchers of beer at most tables and many flavors of ice cream for dessert (like café, mamey, corn, coconut). Pozole is served up Rojo, Verde or Blanco (red, green, or white) and banana leaf pork or chicken tamales and chicken tacos are available, too. Plus all pazole comes with with chiles, chicharrones, radishes, chips and taquititos to doctor up to as spicy and tasty as personally desired. 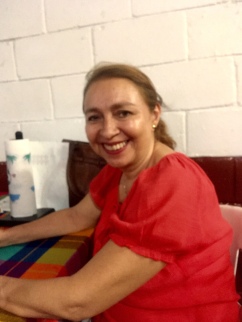 We had such s blast!!! What. Wonderful evening of entertainment and great company!!!

We still had enough time to take in the sunset and a nightcap at la Cantinita with Augustine. Buenos Noches!