On somewhat of a whim, Hubby and I decided to make a midweek jaunt on a ferry into our Washington State San Juan Islands. The Draw – a wine tasting hosted by “Stan The Man” of the bountiful King’s Market in Friday Harbor and presented by Scott Murphy of Unique Wines, a reputable Seattle distributorship. Besides an early start (we are fans of this) and a promised exciting array of mostly European wines, we were looking forward to seeing our speaker.  I have known Scott for forty six years – he used to be m sister’s boyfriend in junior high school!  We have only seen him a handful of times over the decades and really only keep up with him on social media, so we thought it would be fun to surprise him with our support! And surprise him we did as he actually spotted us on the ferry ride over! It was nice to have a bit of one on one time with him to catch up – especially since his goal was to catch a 7:00 boat home. 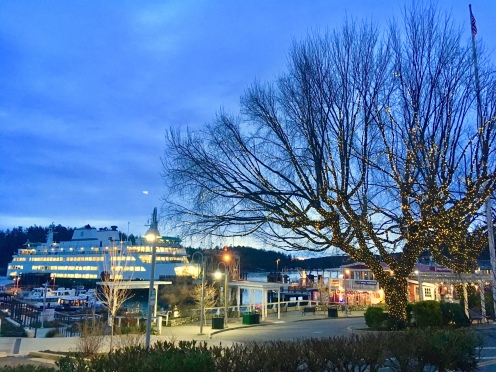 “The San Juan Islands are found in the midst of the Salish Sea, between Washington’s Olympic Peninsula and Vancouver, B.C., sequestered from the Pacific Ocean by big Vancouver Island. The gateway to this wild, beautiful place (from an American perspective at least) is San Juan Island itself.” (from Oregonlive.com).

We drove ninety minutes from our Kirkland home to the quaint harbor town of Anacortes to catch our ferry. During the hour long crossing, besides chatting a bit with Scott, we were lucky to see some black porpoises cavorting in the waves!

Friday Harbor is a charming, historical, walkable seaport just steps from the ferry landing. Many folks “walk” onto the ferry since there is much to do in town without a car. Another popular way to access this slower paced destination port is by boat, as considerable transient and full time moorage is available. And seaplanes land here regularly as well! 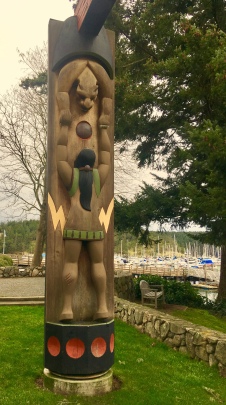 There are friendly, small shops and several restaurants serving up tasty food. And if you’re boating, King’s Market has an amazing availability of grocery items, deli and gourmet offerings, a great wine selection and even cigars! When our kiddos were young and we enjoyed many a summer boating in the San Juan Islands, we loved to stop into Friday Harbor for an afternoon to stock up on supplies – or even to spend a few nights  and maybe catch a movie in it’s downtown theatre.

In this visitor, family, and dog friendly town, you’ll find many of the San Juans’ whale and kayaking tours, The Whale Museum, The San Juan Museum of Art, The San Juan Community Theatre, The San Juan Historical Museum and a number of hotels, Inns and bed & breakfast places.

Everything is within walking distance of the ferry landing, plus it’s easy to get around within town on their trolley as well as to other parts of the island by taxi or shuttle bus. One can rent bicycles (or bring your own) as well as mopeds. From Friday Harbor you can also catch an inter-island ferry to Lopez, Orcas and Shaw Islands.

We had an enjoyable time trying twelve wines at the tasting!! The Senior Center was PACKED and a Good Time Was Had By All!! Then we had a very nice dinner at Vinny’s Italian Restaurant. We loved our accommodations, too! We stayed at the very trendy Island Inn inviting us to settle in with a welcome basket of fruit, bathrobes, a “no diving” sign in the shower and a beautiful view of the harbor.

Before heading home on our ferry the next morning, we drove over to another favorite spot of ours for breakfast – The Lime Kiln Cafe at Roche Harbor. Back in the day, only freshly baked doughnuts were available from a window and they were the hit of the harbor! Now they have a full serve, casual restaurant- and, you can still get the doughnuts!!  It has grown much over the years, yet it manages to keep a low key feel in spite of being a resort – and the appearance of castle type dwellings being built!

“Roche Harbor is a sheltered harbor on the northwest side of San Juan Island and the site of a resort of the same name. Roche Harbor faces Haro Strait and the Canada–United States border. The harbor itself provides one of the better protected anchorages in the islands” (Wikipedia). Many mega yachts moor here – some with helipads even! It’s very entertaining to walk up and down the docks to gawk!

“Roche Harbor has 28 historic accommodations built in the late-19th century and updated over the years. The Hotel de Haro is the state’s oldest continually operating hotel, and its 19 rooms have hosted stays for visitors since 1886. Occupying the second and third floors of the hotel, all of the accommodations have access to the balcony with seating for full views of the gardens and marina.

The historic cottages are a vestige of the company town from 100 years ago, sitting on the sloping hillside on the east side of the harbor. Near the pool, playground and grassy field, these family accommodations are perfect for those looking to engage the island outdoors.” (from the Roche Harbor website).  There is also a Very Cool outdoor sculpture garden!

This 1886 hotel built by John McMillin was a famous stopping place for many, including United States’ President, Theodore Roosevelt. We have stayed here many times. The floors slope and creak, some rooms require a bathroom visit down the hall and there are tales of ghosts. We love it! 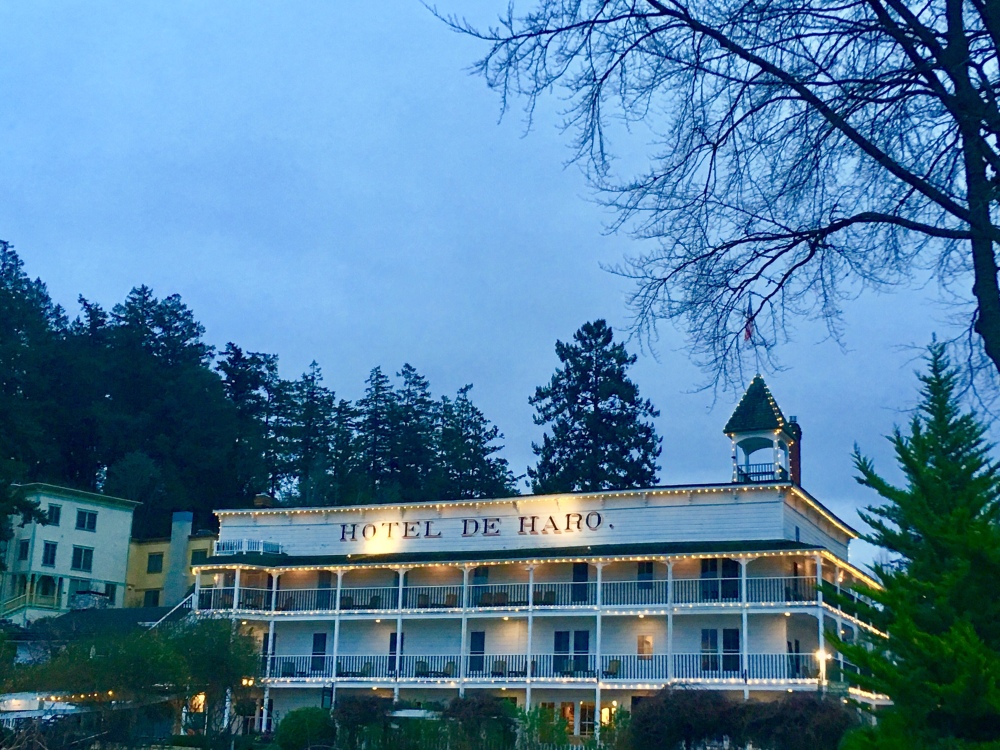 The weather allowed for most enjoyable passages both coming and going, outstanding views of surrounding Mt Baker, The Cascade and Olympic Mountain ranges and other minor peaks as well. We saw hawks and bald eagles and really made the most of our twenty-four hour “staycation”!!

in an Amazing few day stretch of incredible Sunny, Blue Skied, January weather (we hear it has been pouring in Los Angeles!) I had the occasion to join sixteen other walkers for an “Annual”, 6 1/2 mile stroll around Lake Union as organized by gym buddy, Susan! It was crisp, invigorating, social and Fun! “Lake Union is a freshwater lake entirely within the Seattle, Washington city limits and a major portion of the Lake Washington Ship Canal. Its easternmost point is the Ship Canal Bridge, which carries Interstate 5 over the eastern arm of the lake and separates Lake Union from Portage Bay”. (Wikipedia) 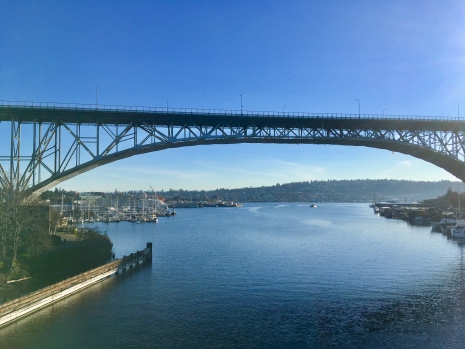 We walked by many houseboats, beautiful moored power boats, sailboats and yachts. We traversed the Fremont Bridge, stopping for coffee near the JP Patches and Gertrude statue (of our childhood television fame) as well as the University Bridge which crosses the Montlake Cut of college rowing and Opening of Boating season fame, running along the west side of the University of Washington. What a stellar day to rejoice God’s Majesty and living in the Pacific Northwest!!! 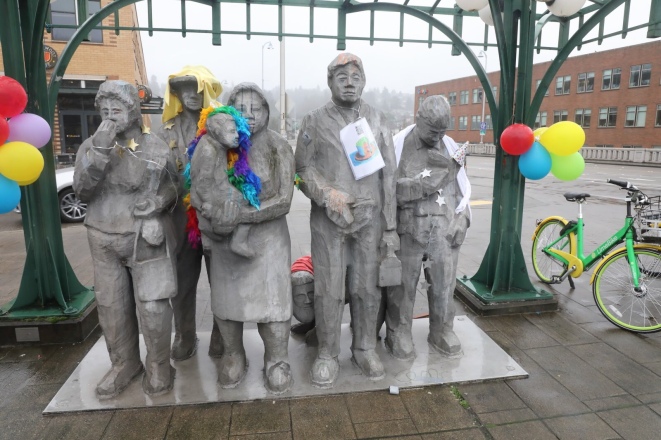