Sunday dawned foggy and chilly – a 36 degrees BRRR!  All week Kirkland, Washington ushered in the morning with turn-the-heater-on temps, yet the sunshine has been of a blinding brilliance offsetting the frigidness and contributing to our decision to go for a local hike today.  As always, once we got going it wasn’t too bad and the fog that ultimately did NOT lift had us feeling cocooned in the blended nuances of a winter day in our Pacific Northwest woods.

Carkeek Park is a 216 acre park and watershed located nine miles from downtown Seattle, Washington, containing Piper’s Orchard, Piper’s Creek, play and picnic areas, picnic shelters, and 6 miles of hiking trails. A pedestrian bridge across the main lines of the BNSF Railway leads to a sand beach on Puget Sound.  We set off along the Piper’s Creek trail and soon heard the very loud, staccato tapping of a Pileated Woodpecker.  And we spotted him, too!!  Unfortunately my pictures did not turn our well, yet we still enjoyed pausing to enjoy his work ethic!  According to the British Library, “The sound created by a woodpecker as it stabs its bill into a tree bark was no doubt entirely adventitious at one stage in the bird’s evolution, as it still is when the bird is feeding or chiselling out a nest or roost hole. But from this behaviour has evolved what might be called the woodpecker’s jungle telegraph, a kind of avian tom-tom system. It might be supposed that the beating of such a tattoo allowed little room for subtlety, but research has revealed that not only can each drum-roll be assigned readily to species (as you might expect) but each can also – by a listening bird or birdwatcher – be identified as to sex and individual. Further, a bird can apparently indicate its emotional state.” (bl.com)

We continued along Piper’s Creek on the trail observing gurgling brooks, small waterfalls, some very old and massive evergreen pine, Western red cedar, spruce, Douglas fir, Western hemlock as well as deciduous cottonwood, maple, cascere, madrona, willow, ash and alder trees and  some very hearty sword ferns, too.  “From November to December, hundreds of people visit Carkeek Park and are surprised, as well as curious, to see salmon swimming up Pipers Creek. Salmon are as iconic to the Pacific Northwest as our evergreen forests and have been for the past millennia. Indigenous peoples knew the richness of the salmon’s return and to this day, continue to respect and honor their homecoming. Once abundant to the point of making water appear as if it were boiling, salmon runs are slowly being restored; Carkeek Park is one of the few places left to view salmon in an urban setting.” (From A Resource Guide for Carkeek Park Salmon Stewards, Seattle Parks and Recreation)  On weekends during the return of chum and coho, Salmon Stewards greet guests beside the creek to explain the salmon’s life cycle, habitat, and human influence on both.

Shortly we came along side the orchard – purported to be the oldest in Seattle.  In the 1980’s, the Piper family tended gardens and planted fruit trees of heritage apple varieties in a logged-over area near the creek. Their produce was hauled by wagon to (then distant) city markets. Andrew Piper was a baker, candy maker (The Puget Sound Candy Factory, burned to the ground in the big Seattle fire of 1889) and artist, and he was elected to the Seattle City Council as a Socialist. Minna Piper was the principal gardener and orchardist. Daughter Tillie, a Seattle school teacher, lived in a cabin  onsite and was an early visitor to the Paradise area of Mount Rainier in 1890, then reachable only by horse. As for “Carkeek” park, land was acquired by the city in 1927, using funds donated by the Carkeek family. The first Carkeek Park was located at Pontiac Station just north of Sand Point and in 1918 was named for Morgan J. Carkeek, an English building contractor who came to Seattle in 1875. In 1928 the park moved to its location in northwest Seattle.

The Pipers’ former orchard was by then overgrown yet rediscovered in 1981, and today the non-profit Friends of Piper’s Orchard work to restore it and initially uncovered 30 varieties of heritage fruit. (check out http://www.pipersorchard.org for more about life here in Seattle’s early days).

We generally followed a predetermined route along several trails and took a few  divergent ones as well, traversing hills and steps both up and down, passing through meadows and trekking down to the beach which is bisected from the park by railroad tracks upon which the Amtrak Cascade rumbles by on its way from Vancouver, British Columbia to Seattle, Portland and Eugene/Springfield, Oregon and back.  On a clear day the Olympic Mountain Range is an incredibly majestic backdrop (and would extend along the horizon behind the pictured sailboat) plus the tip of the Kitsap Peninsula and the southern tip of of Whidbey Island can be seen as well. 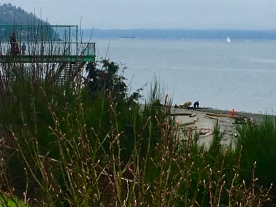 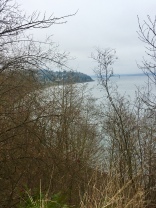 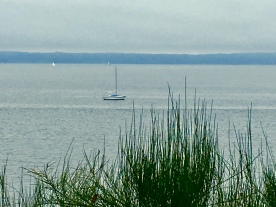 Our mileage was not extensive, the vistas turned out not to be vast, yet it was just enough to employ the #optoutside methodology of recharging my soul!!  And I can’t help but smile smugly to myself knowing that this is punctuated by daydreams of our annual trip to beloved Zihuatanejo, Mexico only two days away!!! 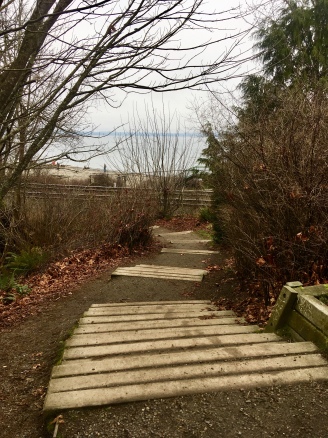 Many of the details noted above were lifted from Wikipedia and the Washington Trails Association website, http://www.wta.org.