Sooo – I ended yesterday’s submission before the day was over! I went to a flamenco show, and OMG! I am convicted, converted, and addicted! What an amazing display of passion, talent and storytelling! I was so glad that I did not wear mascara (not that I usually do I do), as I was in tears and very emotional throughout!! I was just floored by how amazing the performance was! I want to see it again, and again, and again! Supposedly in Barcelona I have some other opportunities!

Today is my last in Seville and honestly, I’m feeling pretty homesick… I’d dearly love to be sharing this trip with the Love of My Life and I know we would rock this together!!! I also imagine how awesome it would be to have our family of four walking the Camino and exploring Spain together. Maybe next time… 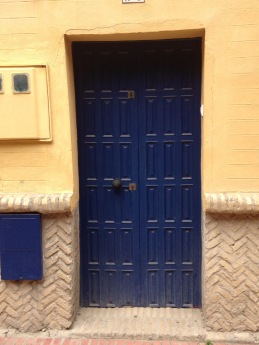 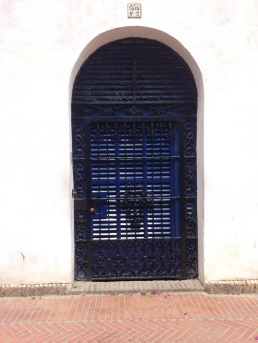 On the other hand, I do enjoy traveling solo as it is great to just get up and do what I want to do when I want to do it! I like to walk a lot more than Bill does, and so I am sure I’m covering a little more territory then we would do together. Plus, honestly, I think the cigarette smoke giving me a headache constantly is getting in my way of supremely enjoying my days in Seville. 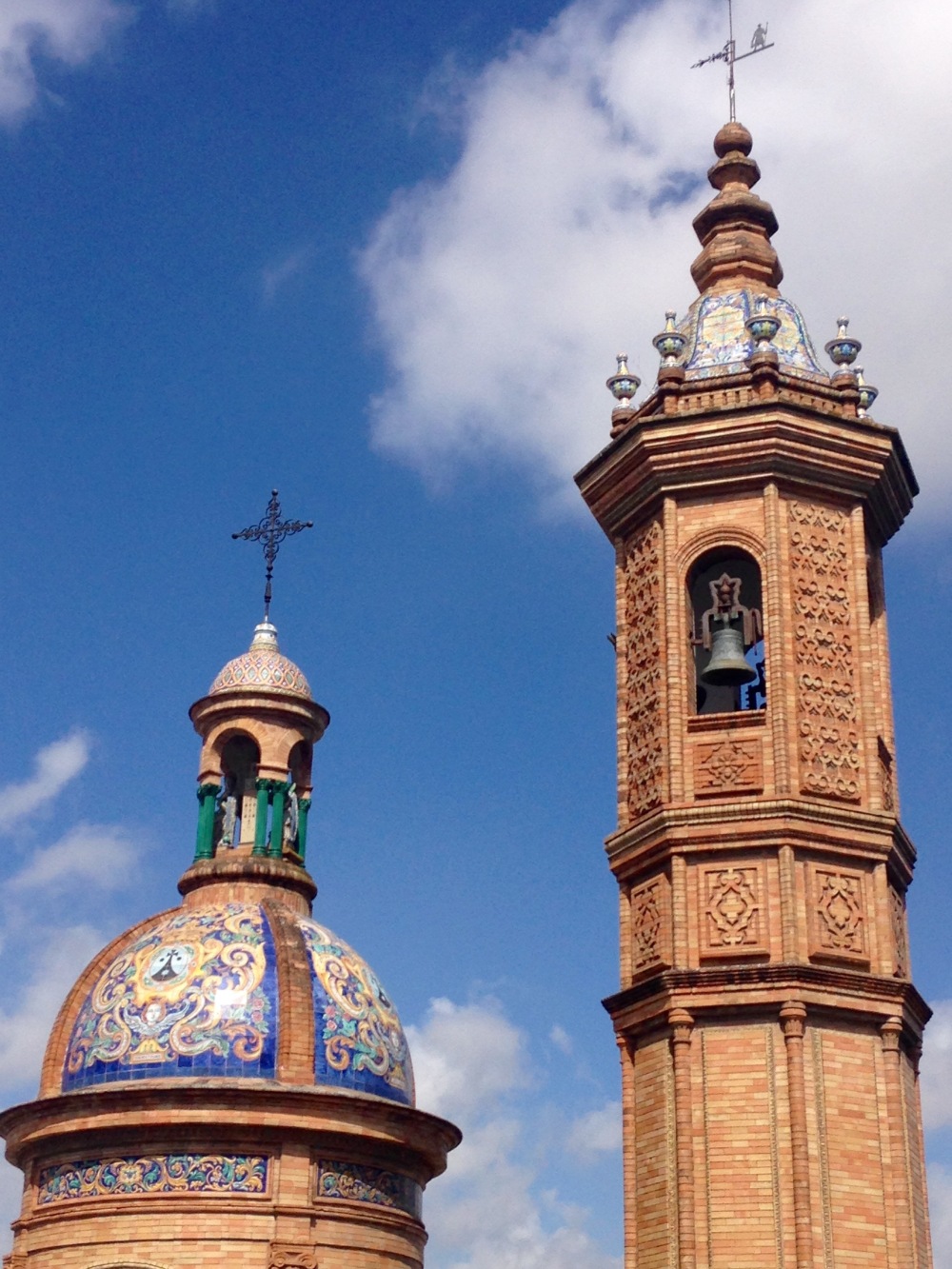 Anyway, I headed out early to determine where I need to be tomorrow morning to catch my bus to the airport. Enroute, I ran across a park that I had been planning to go to! I tabled that for later in the afternoon, and set out (for the third time) to get to the waterfront! Two days ago I went completely the wrong direction. Yesterday, I had my compass dialed in correctly but I just didn’t go far enough. Today I made it! Living in Seattle, I wasn’t as awe inspired as perhaps some would be, but I still very much enjoyed the walk and saw many historical buildings. And, it was another Fabulous day (hearing that there are tremendous storms back home I am truly appreciating this)! 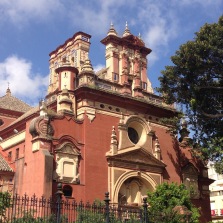 From Wikipedia, “El Arenal is a neighborhood in the historical centre of Seville, the Casco Antiguo. It lies on east bank of the Guadalquivir river to the west of the old Jewish Quarter, Santa Cruz” (where my hotel is located). “El Arenal has a history characterized by its former position as port of Seville, until river silting forced the city to relocate the port to the southern edge of the city in the 17th century.”
Some of the historical sites in the neighbourhood are:
The Torre del Oro, 13th Century Moorish watchtower 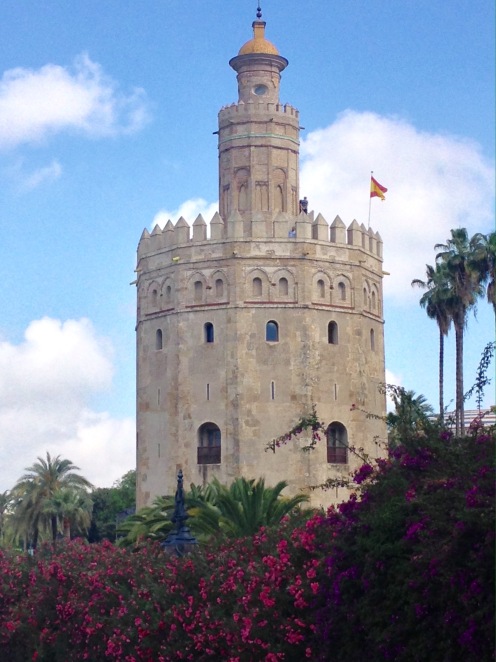 The Reales Atarazanas, the Royal Shipyards, La Real Maestranza, Seville’s bullring and the second most important in Spain, after the Plaza de “Las Ventas” in Madrid.
On to the Mega Parque!!!

From Wikipedia: “In 1929, Seville hosted the Ibero-American Exposition World’s Fair, located in the celebrated Maria Luisa Park (Parque de María Luisa). The entire southern end of the city was redeveloped into an expanse of gardens and grand boulevards. The centre of it is Parque de María Luisa, a “Moorish paradisical style” with a half mile of tiled fountains, pavilions, walls, ponds, benches, and exhedras; lush plantings of palms, orange trees, Mediterranean pines, and stylized flower beds; and with vine hidden bowers. Numerous buildings were constructed in it for the exhibition. The Plaza de España complex is a huge half-circle with buildings continually running around the edge accessible over the moat by numerous bridges representing the four ancient kingdoms of Spain. In the center is the Vicente Traver fountain. By the walls of the Plaza are many tiled alcoves, each representing a different province of Spain. The Plaza de España has been used as a filming location, including scenes for the 1962 film Lawrence of Arabia. The building was used as a location in the Star Wars movie series Star Wars: Episode II – Attack of the Clones (2002) — in which it featured in exterior shots of the City of Theed on the Planet Naboo.”  This park is so massive, that pictures can’t really even come close to doing it justice, so I wanted to share some information about its history, construction and size. 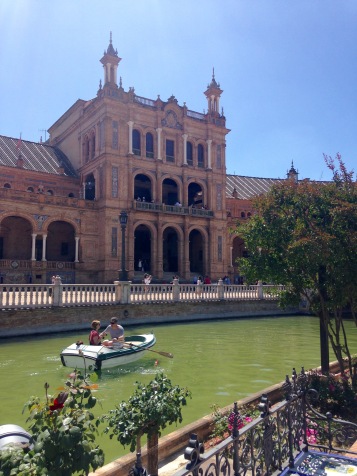 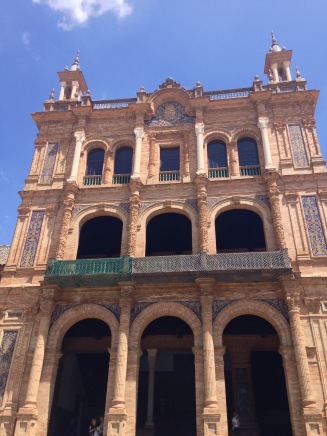 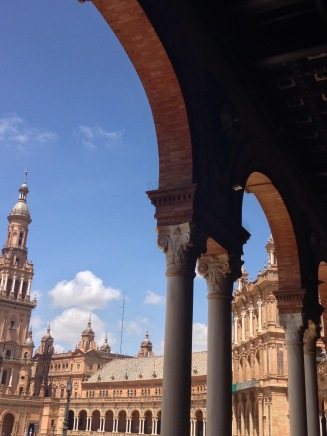 So, it was back to The Amazing, Huge and Beautiful park on my list of places to see!!!  More from the internet, “Parque de María Luisa –

The Maria Luisa Park is the largest park in Seville and one of the most beautiful in Europe. It has a very interesting history. Maria Luisa Fernanda was the younger sister of Queen Isabella II during the 19th century. She lived between 1832 and 1897. She was the youngest daughter of King Ferdinand VII of Spain.
Isabella II married Fernando I, her first cousin, who was supposedly gay. King Louis Phillipe of France had a plan to get the Spanish throne for his grandchildren. He married his youngest son Antoine (1824-1890), the Duke of Montpensier, to Maria Luisa Fernanda. He thought that Isabella II would have no children, so the Spanish throne would pass to her younger sister Maria Luisa Fernanda. He was wrong and Isabella II did have children (many think by a man other than her husband), so Maria Luisa Fernanda did not inherit the Spanish throne.
Maria Luisa Fernanda and Antoine had nine children. Later she and her husband, the Duke of Montpensier moved to Seville and lived in the Palace of San Telmo in the year 1848, after the French Revolution of 1848. The Duke would plot against Isabella II, his sister- in-law. When Isabella II was exiled in 1868, Maria Luisa Fernanda and her family had to follow her in exile. After her husband died in 1890, Maria Luisa Fernanda returned to Seville. Her daughter Mercedes married Alfonso XII, the son of Isabel II and became queen consort.
It was in the gardens of the Palace of San Telmo that King Alfonso XII declared his love for Maria de las Mercedes and had their love affair. In 1893 Maria Luisa Fernanda left half of her gardens of her Palace of San Telmo to the city of Seville. After Maria Luisa Fernanda died in 1897, she was buried at El Escorial. However, the city of Seville did not take the gardens under their management until the Iberoamerican Exhibition of 1929.
Before the 1929 Iberoamerican Exposition, the city of Seville hired the famous French landscape architect Nicolas Forestier to redesign the gardens, now named after Maria Luisa Fernanda. Forestier was the landscape architect who designed the Bois de Boulogne in Paris.
The Plaza de España is one of the park’s most popular attractions and was the centerpiece of the expo. The architect was Anibal Gonzalez, from Seville, and it is a mixture of Art Deco and Mudejar. There is a moat that has four bridges across it. The palace has two large towers and there are sections with benches with beautiful tile work (azulejos) that represent each of the provinces of Spain. In the center of the plaza is a very large and beautiful fountain. The Spanish like to be photographed at the benches of their provinces.
At another end of the park is the Plaza de America, which is also called the Plaza de las Palomas (Plaza of the Doves) because of the many doves that live there. It has many fountains, ponds, and gardens. There is a beautiful Mudejar building called the Pabellon Mudejar, which contains the Museum of Popular Arts and Customs. Across from it is a neo-Renaissance building, which now contains the Archaeological Museum, famous for its Roman statues and remains from Italica, the museum being one of the best in the country. The museum also has the Phoenician statue of Astarte-Tanit, the virgin goddess. The plaza’s gardens have palm trees and roses.
For the expo, there was a building constructed for every country in the Americas. Many of these buildings are now museums or consulates. One of the most famous is the building of Guatemala, beside the Avenida de las Palmeras.
The park has a plaza dedicated to the poet Gustovo Adolfo Becquer. There is a statue of him done by the sculptor Coullaut Valera. The poet wrote about themes of love.”

So Beautiful!! Sorry if that last submission was boring, I think the history is quite interesting myself…

Oh, and I finally put two and two together! I had heard in making my plans for this trip, that May was a big time for fiesta here in Sevia! Actually it seems kind of contradictory. since the fiesta is called April Fair (“Feria de Abril de Sevilla”). According to my reading, it would be obvious where all of parties, both private and public, would be – seemingly all over the place! And everyone would be dressed in grand fiesta wear! Well, it was not obvious to me. I thought it would be at the fairgrounds, but I found them today and no, it was not. But at the very end of my day today, I ran across a special bus taking people out to the Feira fairgrounds. I have seen many folks dressed up in their flamenco attire, and I figured out that they seemed to be headed there, so I guess-the next time I come here I will have it figured out! 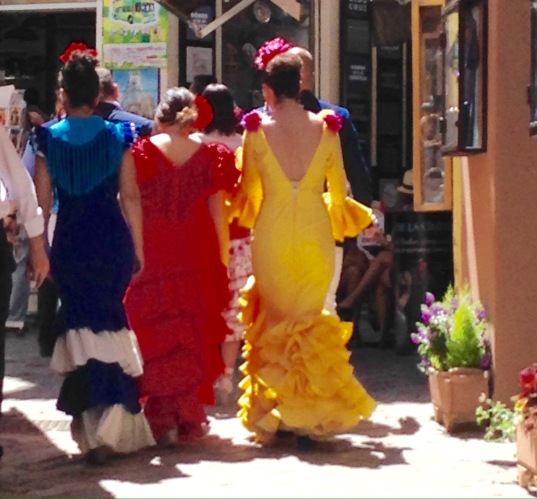 The heat got to me, and I took a little time out for some gift purchasing, but basically I took it easy after 4:00. It’s on tomorrow to my last stop in Spain, Barcelona!