Today I was extremely fatigued and just wanted to “do nothing”, but dang, I’m in Barcelona, y’all!! So, this ends up being a long blog with lots of internet fact sharing. Grab yourself a café con leche (or vino tinto/vino blanco) and come walk with me! (I only took a few photos since I have taken many in the past.)

I finally mustered the energy to get my walk on by 10:00 and wandered past the Barcelona Cathedral. According to Wikipedia, “The Cathedral of the Holy Cross and Saint Eulalia, also known as Barcelona Cathedral, is the Gothic cathedral and seat of the Archbishop of Barcelona, Catalonia, Spain. The cathedral was constructed from the thirteenth to fifteenth centuries, with the principal work done in the fourteenth century.” 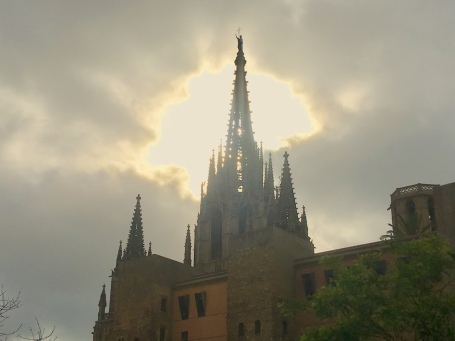 Just beyond the Cathedral I happily strolled through my hubby’s and my favorite mercado here, the Santa Catarina Market. It is constructed on the former site of the Convent of Santa Catarina, from which it takes its name. “Opened in 1848, the Santa Caterina market was the first covered market in Barcelona. It has recently been completely renovated with a modern look but in keeping with a traditional Catalan market. The brightly coloured undulating roof was designed by architects Enric Miralles and Benedetta Tagliabue. This extraordinary new roof consists of 325,000 ceramic pieces of over 60 colours representing the colours of the fruit and veg sold inside.” (barcelona-home. com). Had I been hungry I would most definitely have sat down at the counter of O Menjar, Beure I Diversio. The dishes are fresh, delicious and it’s delightful to watch them cook! Handsome Hubby and Dynamic Daughter love it, too!! 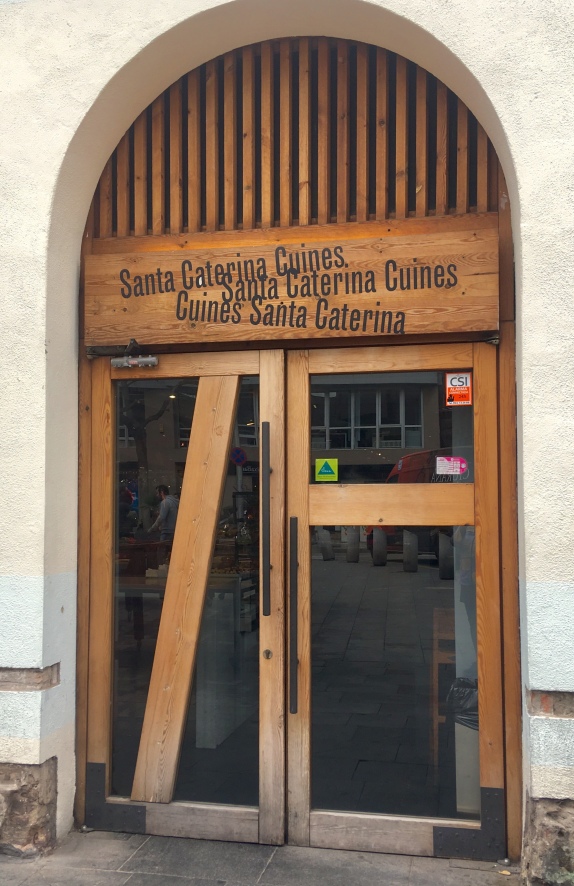 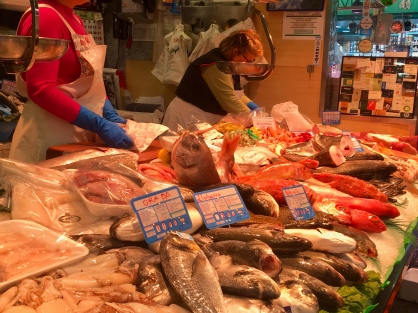 I made my way through Plaça Reial to get to La Rambla on my way to the waterfront. Known for its many outdoor venues, restaurants and nightclubs, Placa Reial is a popular meeting place during the summer when open air concerts take place. “In about 1835, many of Barcelona’s religious buildings disappeared as a result of the confiscation of properties. This was the case with the former Capuchin convent which was demolished leaving a huge vacant plot behind. The current Plaça Reial was built a few years later. The architect was Francesc Molina, and he designed a luxurious square with the aim of extolling the monarchy. King Ferdinand VII, who was king at the time, was to be immortalised as a statue depicting him on horseback in the centre of the square. The monument never came to fruition and, in its place, stands the fountain of the Three Graces. The two streetlamps on both sides of the central fountain were designed by the young Antoni Gaudí. Surmounted by a winged helmet and a dragon, they were put in place in 1879. Around them, the royal palm trees grace the square lending it an exotic touch. There are uniform, noble buildings on every side with porticoes and terracotta decorations. They were the home of important Barcelona families, although this luxurious appearance has been somewhat toned down by a more bohemian atmosphere.” (barcelonaturisme.com). Also from this website: “La Rambla is exactly 1.2 kilometres long and nearly everyone who visits Barcelona walks along it. La Rambla was laid out in 1766, following the contours of the medieval city walls that had bounded this part of Barcelona since the 13th century. The locals took it to their hearts straightaway. In Barcelona, a city of narrow, winding streets, the Rambla was the only space where everyone could stroll and spend their leisure time. And we mean everyone. Because of its central location, the Rambla became a meeting place for all the social classes.” 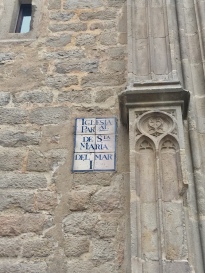 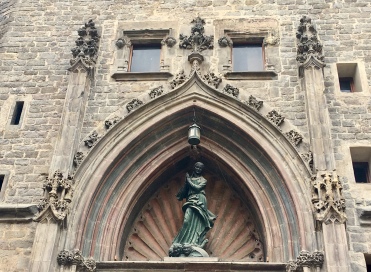 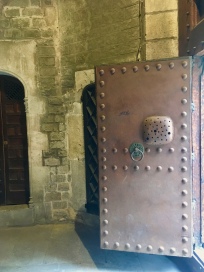 “Santa Maria del Mar is an imposing church in the Ribera district of Barcelona, Spain, built between 1329 and 1383 at the height of Aragon kingdom’s maritime and mercantile preeminence. It is an outstanding example of Catalan Gothic, with a purity and unity of style that is very unusual in large medieval buildings.” (Wikipedia). 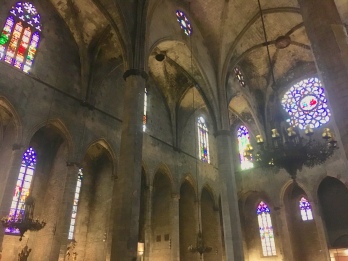 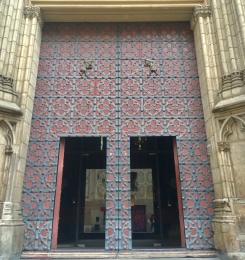 Eventually I made it to the waterfront where throngs were taking photos of the Imposing statue of Christopher Columbus, “El Monumento a Cristóbal Colón” (they sure love him in Spain!) Inside you can find Barcelona’s first hydraulic elevator which is still in operation. It was constructed for the Exposición Universal de Barcelona in honor of Columbus’ first voyage to the Americas.

“Barcelona’s harbour marina is called Port Vell, which means ‘old port’ in Catalan language. Port Vell marina borders the gothic quarter and Barceloneta and is a lively and popular area for visitors and fishermen. For tourists there are many things to do both on and near the water. At Port Vell you can find the Maritime Museum, the Columbus Monument, the Barcelona Aquarium, the shopping mall Maremagnum and many activities including bike tours, Segway tours, harbour boat tours and many fantastic restaurants and cafes in the Barceloneta area. 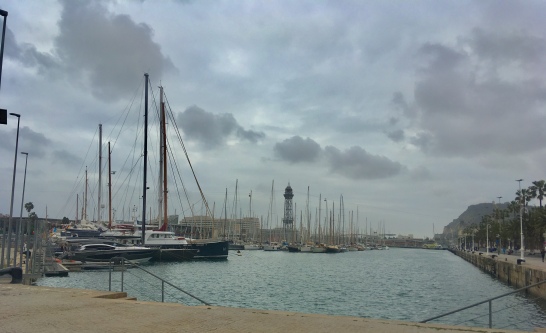 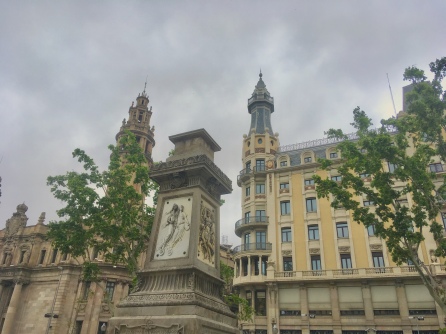 A recent addition to the Port Vell is the OneOcean super-yacht marina and even if you don’t have a super yacht you can book a table at the OneOcean restaurant in the marina. Some of the smaller cruise ships also dock in the Port Vell marina” (barcelonayellow.com).

Finally, on my way back to beat the rain and to take a rest (as I am going to a late flamenco show at Palou Musica and I Am So Excited!!), I popped into the more touristy market, Mercat de Sant Josep de la Boqueria also referred to simply as Mercado de la Boqueria.

It certainly is a feast for the eyes and is noisy and popular, having entrances off La Rambla.

I wish I was more savvy with highlighting references, because I have taken some fantastic photos of these sites in past visits and posted them on former blogs. As a result I did not include very many today. More about the flamenco show later!!!! 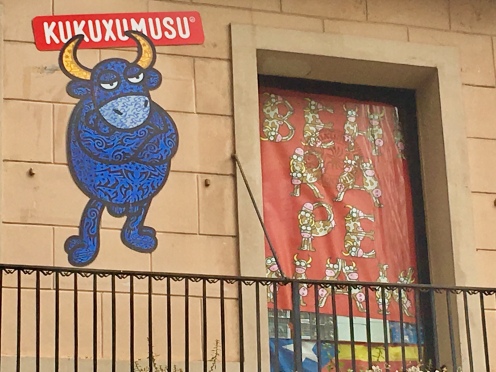