I am a HUGE Major League Baseball MANIAC!!  I don’t have a nostalgic story about going to games with my grandfather or of painful, interminable years as a loyal fan of a losing team (like my Chicago friends).  I don’t have any relatives that play Major League baseball nor has going to the ballpark been one of those regular activities with “the gang” that became tradition.  I may not have “a story”, yet I do know that my excitement for all things baseball is impossible to contain and lights a fire within!!

Since 1998 I have (slowly) been on a mission to visit all of the major league baseball stadiums.  One cool aspect of this is that it marries my thrill of travel with my love for baseball and allows me to feel less guilty about gallivanting about because I have an actual purpose – like when I used to run marathons around and about.  It also often involves Family which is very special!

My son and I did a four stadium, East Coast trip when he was still in junior high school, taking us to Fenway, the former Mets and old Yankee Stadiums and on a Greyhound bus to Baltimore. Not to mention a very fun time in New York! And when he was even younger, we took a trip to San Francisco and saw Barry Bonds play in Candlestick Park, enjoying the historic waterfront and serpentine Lombard Street together as a side benefit.  Recently the “Willmeister” and I have tried to make this endeavor an annual trip and have been to see the Oakland A’s, Chicago Cubs and a Boston revisit to cheer on the Red Sox and Big Poppy as we made our way to Cooperstown for Ken Griffey Junior and Mike Piazza’s inductions into the National Baseball Hall of Fame!!  Big Will was also along with his sister and dad for our family assault on Arlington stadium to catch the Rangers with a laugh filled side trip to Austin, Texas to celebrate his birthday.   And I have fond memories of Willie and his sister, Linzer Lou, joining me on another fun trip to that most enjoyable city, San Francisco, within the first three years of the Giants’ move into their new PacBell Stadium.

One year both of my sisters and I visited a high school friend in New York and went to a Yankees game in their new stadium, rented a car in New Jersey and drove to Philly for a game and then on to Washington DC where we visited with an Aunt and Uncle we had not seen in a decade with them ultimately joining along with us for the Nationals game! And on that same trip I enjoyed a solo game to the new Met’s Citi Field! I could go on and on – the trips coinciding with family reunions and outings with cousins, other baseball fans, piggybacks onto graduations and vacations – all very pleasurable memories!

Though I have officially been to 30 stadiums and there are in fact 30 Major League Baseball teams, given that several new stadiums have been built as improvements over their predecessors, I am still chasing my goal.  And unfortunately, I didn’t get to Montreal before it ceased to be a part of the system.  Last year it looked like I would not make it to my minimum one annual stadium, but Hubby saved the day and we had a Fabulous time in San Diego and got in a game watching the Padres at Petco Park.

And with my two Camino walks and extended trips to Spain this year, both of which occurred during the baseball season, it was looking as if this might be the year I would have to miss my mark. Billfish to the rescue AGAIN!!! Virtually last minute – and during playoffs to boot, he pulled the trigger on a quickie trip to Houston! Unfortunately, it was the last hurrah of the season for the 2017 World Series Winners, the Astros, but seeing some of my favorite players was a thrill!! And of course, I got to check another stadium off the list. 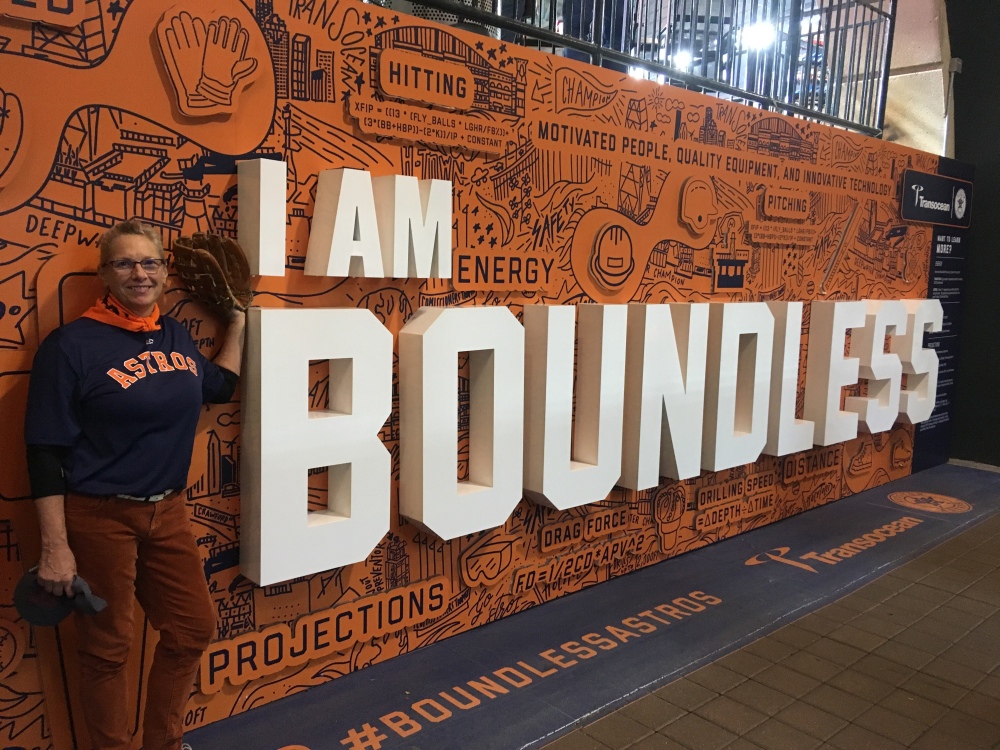 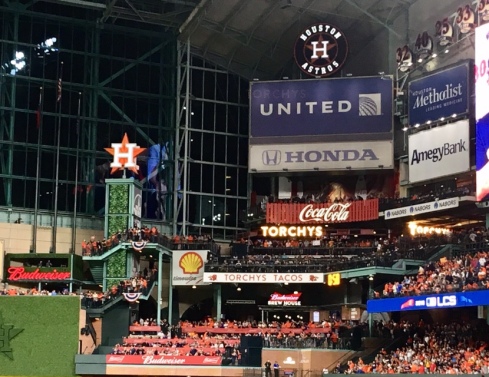 Houston in general was not as much to my liking as others we have visited and the grey skies did little to enliven it. We did a scavenger hunt of several of the town’s acclaimed wall art and rode three different lines of the bus just to get around and see the city as we were without a car and made the most of our opportunities. 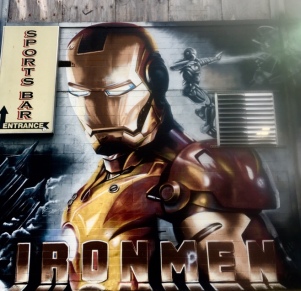 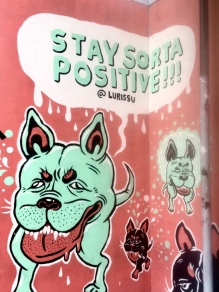 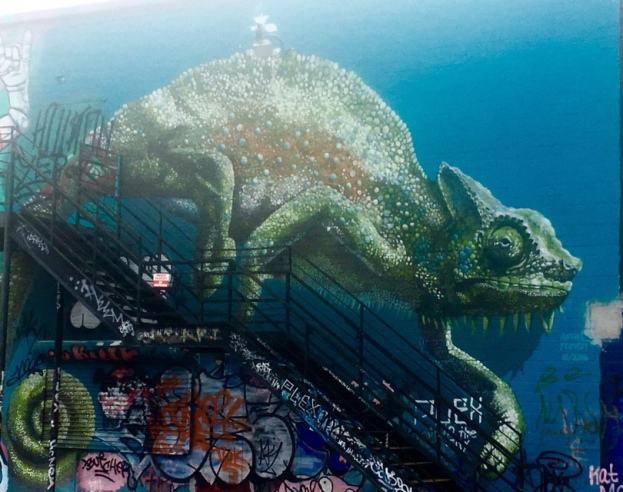 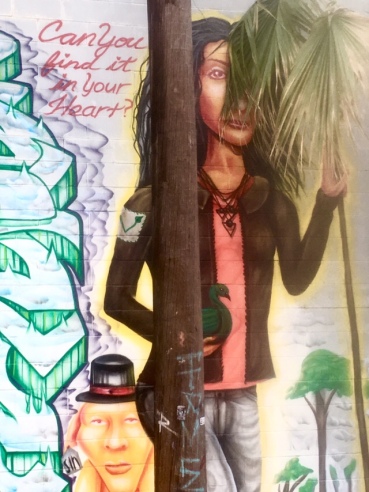 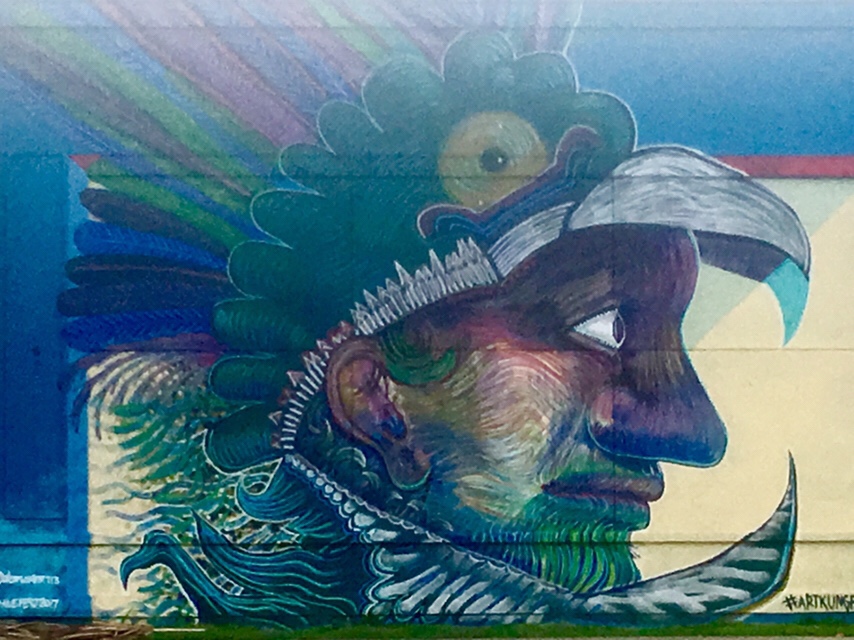 Our Modus Operandi is to seek out great culinary experiences when we travel and we found some Amazing restaurants including Xochi. WHAT A TASTE TREAT!!! This is authentic Oaxacan fare from Houston James Beard recognized restaurateurs, Hugo Ortega and Tracy Vaught who are evidently a powerhouse in Houston. One of the items on the menu that we DID NOT have was “Queso del Rancho”, a “housemade queso de cincho, chicharrones, trio of insects – gusanos, chicatanas, chapulines”, uh, worms, flying ants and grasshoppers! They looked beautiful though… Something else that jumped out from the menu at me and which I did not have (it was so hard to decide!) was the Mole Flight, with a choice of four of their many moles. However, I did have the “Codomiz” which was bacon wrapped quail stuffed with chorizo and the mole that I craved (one of them) with fig and corn bread! We started with a “Tamal de Huitlacoche” (basically a corn tamale and huitlacoche is a fungus which randomly grows on organic corn and is rare since it develops on the corn ears as they ripen after the rainy season or an errant rainstorm – we choose this whenever we find it on a menu!) Bill had a delicious skirt steak and for dessert we very much enjoyed the “pastel de queso fresco” – cheese cake with blackberry sorbet, corn streusel and salted caramel popcorn!! We also had a shot of delicious tequila and a shot of mescal! 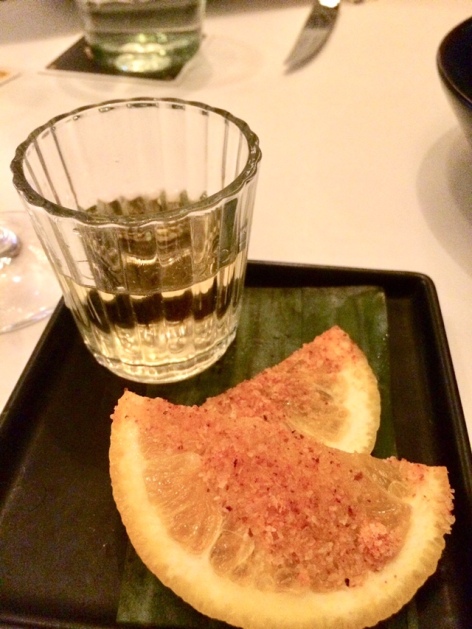 Another spot we slipped into after the ballgame at Minute Maid Park was Osso & Kristalla, which we hear is a fairly new Italian trattoria from Houston Astros-Owner Jim Crane. It is conveniently located across the street from the park (and next door to the more upscale Potente restaurant, which he also owns). Mr. Crane named the restaurants after his three children. We loved the open kitchen and feasted upon a Texas-Italian Sausage, Roasted Pepper, Onion, Provolone and Basil, thin crust pizza which was very fresh, seasoned perfectly and Delicious! Our waiter, Christopher Ritchey, was very personable, made a mean gin martini and had a masterful knowledge of wine!

Our last day we had time to fit in a basic burger at the Hubcap Grill – in a narrow, shotgun building with an attached covered porch. They only accept cash! Nothing fancy and the lady behind the counter was pretty no nonsense and didn’t take well to questions, yet the food did not disappoint! Do you think we overindulge a bit too much??!!?  Flying over Mt. Rainier was an inviting, “Welcome Home!”