As a reward and treat to myself upon completion of El Camino Frances, I decided to stay a couple of nights at “The Paradore” which is adjacent to Catedral de Santiago on the Praza de Obradoiro. From the brochure in my room, “Arab fortresses, former convents and monasteries, palaces, castles, ancestral homes… unique buildings of both yesterday and today. This is Paradores. Magical hotels were a stay is always an unforgettable experience. And opportunity to discover and enjoy the full variety of Spain’s landscapes, gastronomy and history from an exceptional vantage point.” Paradores are a series of luxury hotels throughout Spain using historic buildings. They are works of art and examples of the architecture that shaped their history over the centuries. “They are hewn stone that speaks of past lives and the new lives that emerge amidst the battlements, viewpoints and towers looking out onto the past. At Paradores, we preserve, care for and open up these historic buildings, places you’ve always dreamed about.”

As for the building itself, it’s like living and being a part of history!! The artwork and furniture and massiveness of the doors and courtyards is beyond impressive, breathtaking and overflowing with significance!! 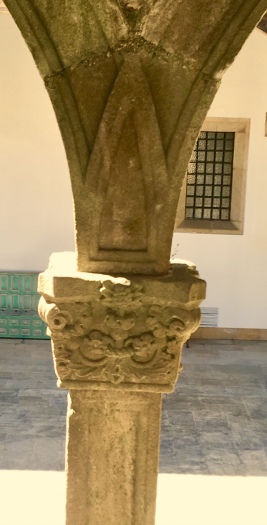 El Hostal dos Reis Católicos, located in the city of Santiago de Compostela, is “one of the most luxurious and beautiful hotels of all the Paradores, as well as being one of the oldest in the world.” It was discovered on a journey made to Santiago in 1486 by Ferdinand and Isabella, the “Reyes Católicas” (Catholic monarchs), who after seeing the deplorable circumstances the pilgrims were living in, decided to build it in 1499. Before the XIX century, the Hospital Real de Santiago served as a hostel, infirmary and orphanage. Under Franco, this historical building was converted to a Parador. It has a privileged location in the Plaza de Obradoiro next to the Catedral de Santiago, “a religious pilgrimage destination know the world over”. (Quotes from A Village To Village Guide To Hiking The Camino De Santiago, Anna Dintaman and David Landis) 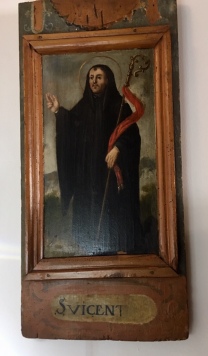 In addition to rich artwork and classic furniture pieces, the building is filled with placards describing various historical references, such as: “News of the discovery of the tomb of Apostle St. James in the 9th century was spread far and wide by the Bishop of Ina Flavian. The event reached the ears of the King of Asturias, Alfonso II, who became the first pilgrim to journey to venerate the relics of Saint James. When he arrived, the monarch ordered the construction of a small church on the site eventually occupied by the monumental Santiago Cathedral, last stop on one of the world’s most important pilgrimage routes. Santiago’s Old City was designated a World Heritage Site by UNESCO in 1985, European Cultural Itinerary by the Council of Europe and has received the honorary title of Main Street of Europe. 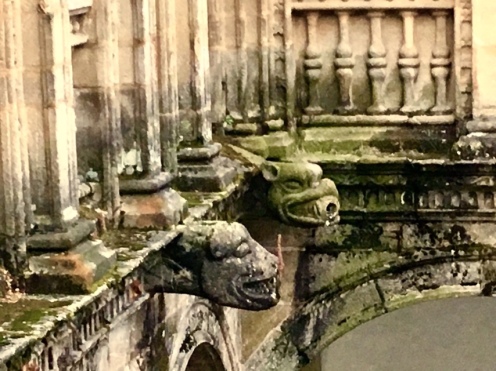 During the Middle Ages, the journey to Santiago had already become a mass event, creating many of the routes whose tradition has continued to this day. In the first half of the 12th century, the Codex Calixtinus was drafted. This valuable manuscript includes, among other information, the description of the miracles of the Apostle, the transfer of his body to Galicia and a very unusual pilgrim’s guide, with descriptions, recommendations and practical advice. The codex is preserved I. The archives of the Santiago Cathedral. 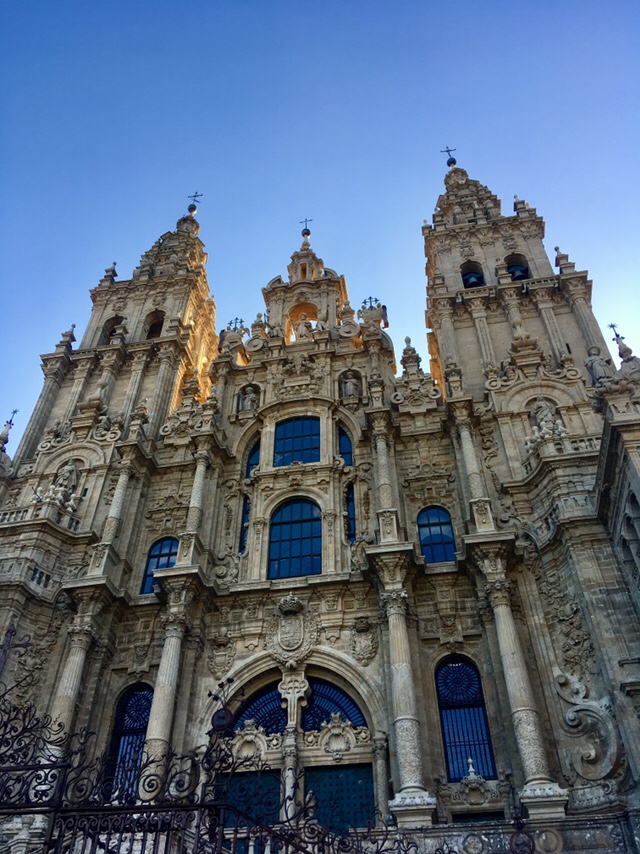 The best known route is the French one, which begins as four branches that come together in The Navarre town of Puente la Reina. However, there are many others running across the entire Iberian Peninsula, following ancient routes such as the Via de La Plata, or skirting the coast, ultimately moving inland to Obradoiro Square.” 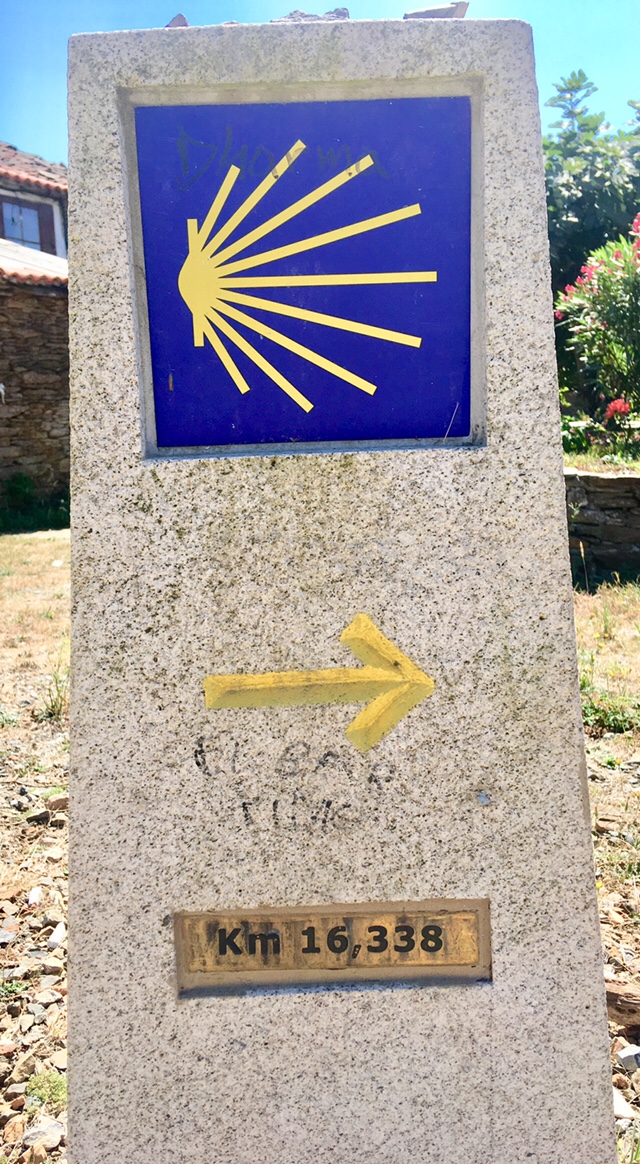 I hope you’ll understand that I choose to quote other experts since there is so much detail of the centuries leading up to my arriving here for a third time. It’s mind-boggling for me to put that into perspective!! Not only the centuries and the first pilgrims, including King Alfonso II, but the peregrinos who just walked yesterday and last week, last month, last year… 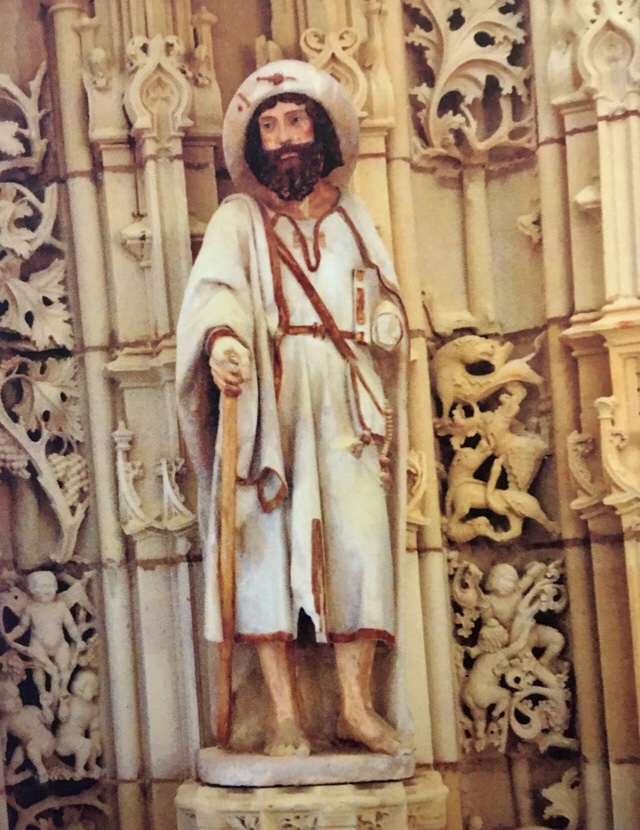 “Compostela, the most excellent city of the Apostle, complete with all delights, having in it’s care the valuable body at St. James, on account of which it is recognized as the luckiest and noblest a city in all Spain.” (Codex Calixtinus) 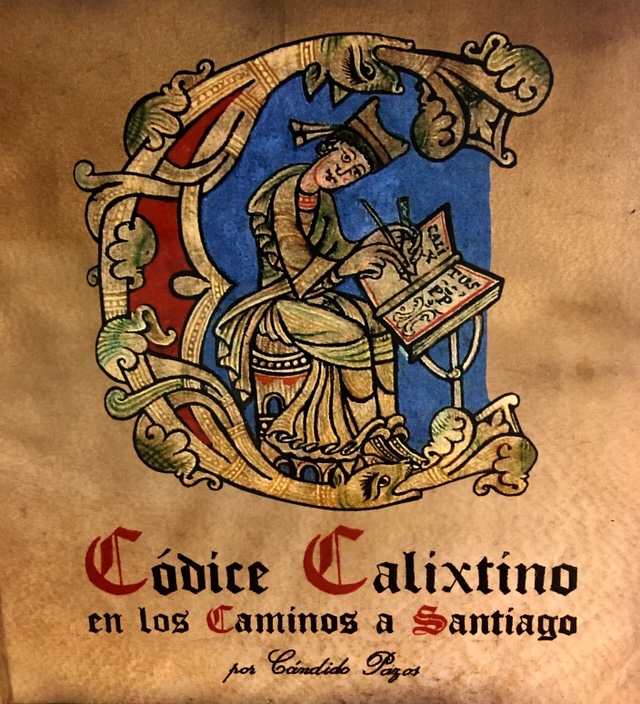 “Historical evidence suggests that Santiago was once a Roman city, followed by Visigothic rule. The kings of Galicia and León were crowned here at the cathedral and Santiago became the capital of the kingdom of Galicia. The town was fortified in the 11th century after suffering attacks from the Muslims of Al Andalus. Santiago‘s rich architectural heritage demonstrate its role as the most important city in Galicia through the ages.” (A Village To Village Guide To Hiking The Camino De Santiago, Anna Dintaman and David Landis) 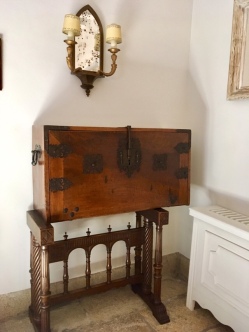 I mentioned yesterday that I chose to wander outside the city center to see pilgrims walking their last steps into the Cathedral rather than hang out in the craziness of the Square. I guess I haven’t really explained and if you’ve not been here to experience it you wouldn’t really have a grasp of what I mean by that “craziness”. It is the final destination and one witnesses all kinds of emotion. Peregrinos are singing as they come in, crying, hugging, high-fiving, some get on their knees and craw,l some life flat on their back‘s with their feet in the air… And of course there are lots of photos being snapped and poses being struck! The square continues to fill up all day as everyone is on a different schedule and many choose to just hang out and wait for their friends to appear or just to soak in the last ounces of this relaying and challenging experience and accomplishment. By mid afternoon the place is packed! Add to that all of the tourists, since this is a popular and important Spanish city, well you’ve got a frenetic, people watching paradise!! 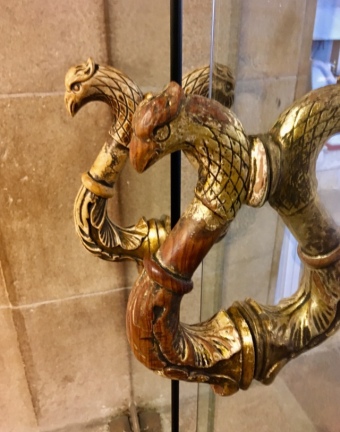 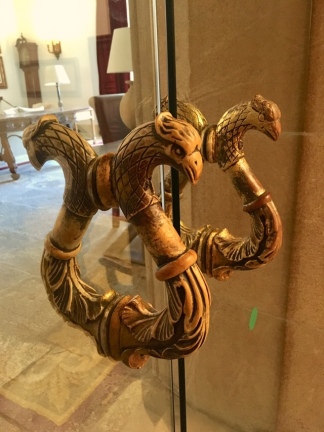 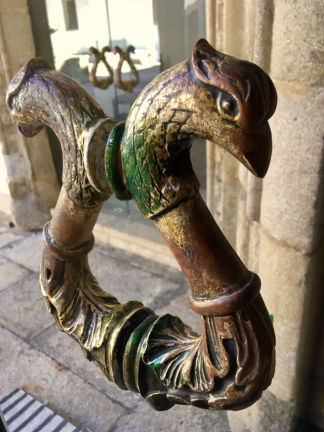 “Pilgrims first head to the Praza de Obradoiro, the largest open plaza facing the iconic western façade of the cathedral (featured on the euro coins €.05, €.02, and €.01). Medieval pilgrims gathered here and spent the first night in the city keeping vigil in the plaza or inside at the high altar. Fighting for the best spot was intense and in 1207 got so violent that the church had to be reconsecrated!

Next, pilgrims entered via the west door, through the Pórtico de la Gloria by master sculptor Mateo. Pilgrims touched their hand to the Tree of Jesse in the central column. While it is no longer permitted to touch, five finger holes have been worn away from millions of pilgrim hands. The sculpture of Master Mateo also bears the tradition that those who press their head against his will absorb some of his wisdom. Pilgrims would then attend Mass and receive indulgences and make their offerings to Santiago and the chapels of other saints. Next the pilgrim will confess to a priest and obtain their Compostela.” (A Village To Village Guide To Hiking The Camino De Santiago, Anna Dintaman and David Landis)

Also from the same guidebook, “The next ritual was to climb the small staircase behind the Altar Mayor (often a line) to touch the golden statue of Santiago. Medieval pilgrims would place their hat on his head and their cloak over his shoulders. The statue used to have a golden crown that pilgrims would place on their own head, but the crown has been lost at some point. Today pilgrims usually give the statue a hug or lay their head against his shoulder, to whisper a prayer or message of thanks. Next, pilgrims descend to the crypt, with the bones of Saint James and his two followers. One tradition is to leave behind one’s walking stick or other memento. Surprisingly, the bones of Saint James were misplaced for almost 300 years before being returned to the crypt. In 1589 they were hidden elsewhere in the cathedral to protect from invaders. The bones were rediscovered and returned to the crypt in 1879.

If you’re lucky, during the daily noon Pilgrim Mass you will get to see the famous botafumeiro in action. Literally the “smoke-belcher”, the botafumeiro is the largest censer for spreading incense smoke in the world. Weighing 80kg (175lb) and 1.6m (5ft) in height, the huge censer is swung back and forth from a pulley system above the altar, requiring eight men to get it reaching speeds of 80kph. It is said the censer was installed to cover the stench of all the unwashed pilgrims. The censer is only brought out for special days, though a donation of €300 is said to sponsor an extra showing.” I have been fortunate to see it in action both of my previous times here. Even though I’ve been here in Santiago de Compostela for two days I have yet to go to the noon Mass. I will though, and maybe I’ll get lucky and see it again -It is quite the sight!! 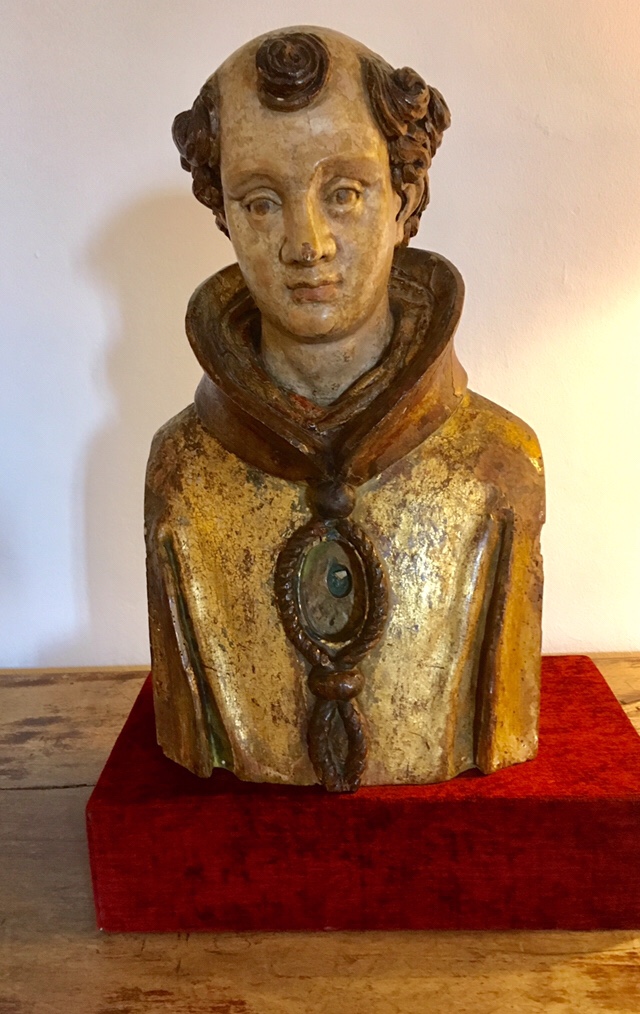 Well that’s probably enough historical information for one blog post! You can be sure that more will follow though because Bill and I plan to take a tour of the cathedral Friday and I still need to reference back to my time in Astorga! Hubby is in Madrid and will soon be at my side to share in this historical adventure! 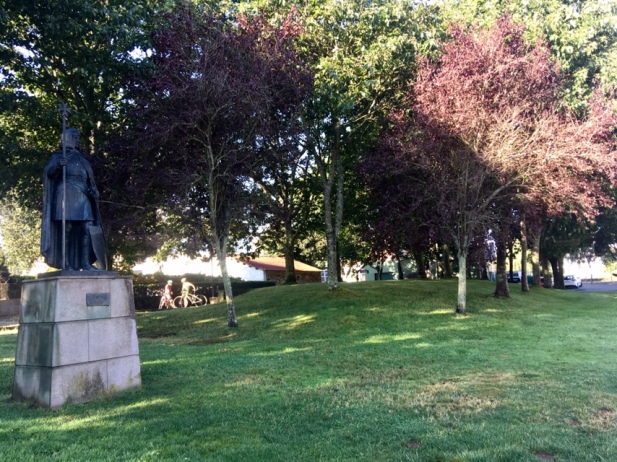