This morning, most of the 50 pilgrims in the house had the same idea about timing of departure, so our albergue was a bustling well before 6 o’clock! I don’t usually have breakfast before I set out, preferring to have a snack about two hours in, yet there was an area of leftover peregrinos items that we had access to so I chose to have some “free” cereal and milk and a couple of rolls of sliced salami. 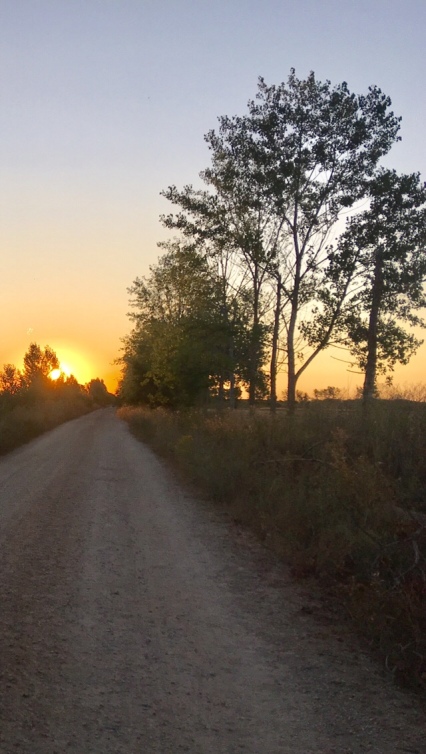 Walking by the beautiful light of a full moon again, I started out with a few others yet soon moved ahead with my more energetic, typical, morning pace. It wasn’t that long before “Johnny Irish” caught up with me! I talked with him for about five minutes yesterday and today he helped the first hour go by quite nicely. He is a psychological counselor.  They say, when you need a teacher, the teacher will appear – and so he did. Ironically, much of what we talked about was an experience that he enjoyed on his first Camino. He mixed in with with a bunch of younger people who he said he would not have typically joined and found himself stopping for picnics, drinking lots of wine, laughing and enjoying himself immensely and creating a family of 16! Many of whom he is still in touch with today. Two of them he has shared additional long distance treks in other countries with. The message he received: being too serious all the time is not normal and is not what he wanted going forward. Wow – did that “hit home”!! 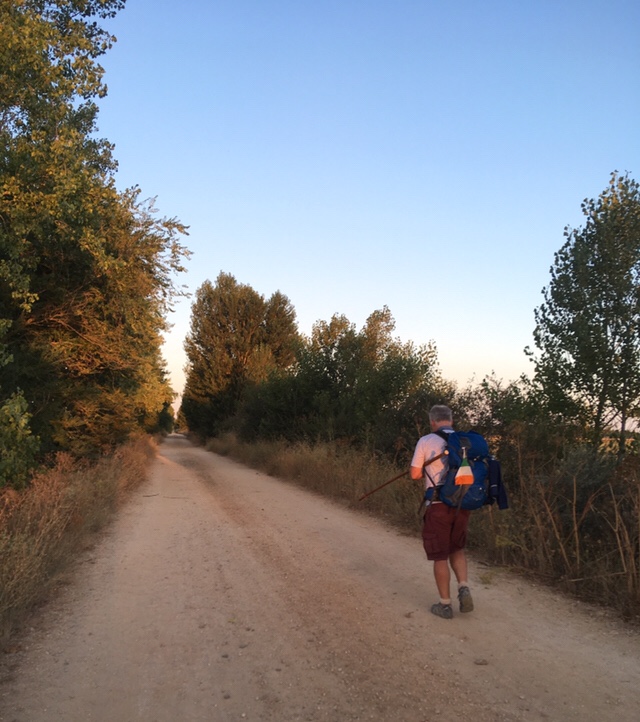 We also talked about behaviors that may come off negative to others, yet are born out of our natural sense of survival – that we all have those aspects of self. Our discussion hit upon alot of the ideas that I have been thinking about these last few days. Anyway, Johnny Irish is a lovely man, I was happy to share some of his insights and my morning with him and I’m sure I’ll see him again, though he does walk quite a bit faster than me! 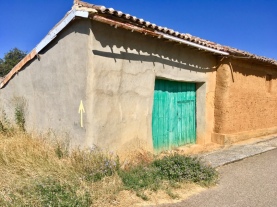 More of the Meseta, acres and acres of sunflower fields and more straw and wheat fields. My guidebook cautioned us all to be prepared for a 17 kilometer slog with no services. Because of that presentation, I found myself intermittently worrying about it until I realized that was kind of my normal day anyway! I’ve actually been conditioning myself for this very agenda in my last five days, so, “piece of cake!” Most people I happen to talk to like to break a few times in the morning and it has not been unusual for me to go four to six hours without stopping. I just have a hard time getting going again after I stop and prefer to have the luxurious, long break at the end. So it’s worth it to me to keep going and have a snack or two along the way. “People” say I should “stop to smell the roses”. At home, I smell every rose I go by! And, here in Spain I’ve smelled every rose that I have seen and there have been a few…. Truthfully, that’s part of what the Camino is about – going inward, reflecting and getting to some emotional depth. I believe I’m doing that, and in actuality, this process continues to propel me through the minutes and hours, sometimes without really being aware of how much time is going by. So, I’m not trying to be competitive (though I would be lying if I didn’t recognize that there’s something to that. Mostly about getting in the shower before all hot water is gone and having a premium sun focused drying spot on the clothesline!) The reality is that it’s just my true pace, I am enjoying it, and I’m capable of it. Stopping to spend money on food and beverage I don’t really need, to BS with people – it’s not really what I enjoy right now. I do love the evenings to get to chat one on one or three and four with fellow pilgrims and have the chance to talk a little more in depth with them instead of “where you from, how far you goin’, where did you start, is this your first…”  Anyway, here I am justifying again! 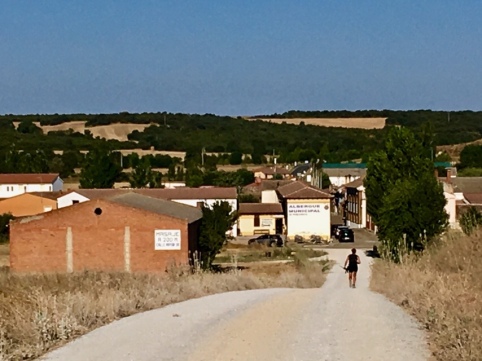 Fact of the matter is, today was another day of similar scenery as the last four (or is it five…?) And along the highway. I have told myself several times that I could just as well be home walking along the express. I could also probably walk from Tacoma to Ellensburg and experience much of the same motorway and scenery. But here I am in Spain! I know as we get into Astorga and Galicia that the scenery will become more lush and varied and I am truly looking forward to that!

And guess what! After the 17 km slog I DID stop in Calzadilla and have a café con leche and a piece of lomo (ham)! And, I had a wonderful conversation with the proprietor who complimented me on my Spanish and who has done nine Caminos himself with the credentials framed on his wall, and which he joyfully and proudly pointed out to me!

It was a nice stop and then it was on board for an additional 6.3 kilometers into the lovely little hamlet of Ledigos with it’s inviting park and locals out enjoying the day. Out of town it was on to the sweetest pathway I’ve seen in days and a floral fragrance to match. The last 3.3 kilometers found me in Terradillos De Los Templarios, population 17,  where I will lodge for the evening,  Sure ain’t nothin’ else to do there!!!

This town “was once home to a 13th-century church belonging to the Knights Templar, but is one of the few pilgrim towns that never had a pilgrim refuge until modern times. Inglesia de San Pedro contains a Gothic Crucifix but is rarely open. The church is built of brick rather than stone, as this area has very little local stone.

The Knights Templar were a medieval order responsible for protecting pilgrims. While the order was popular and successful for almost 200 years, grand master Jacques de Molay was arrested in 1307 (on Friday the 13th, possibly the origin of this superstitious date) and burned at the stake for heresy and a variety of trumped-up charges. The order was disbanded in disgrace, though many think the charges had more to do with politics than any actual wrongdoings.” (A Village to Village Guide to Hiking The Camino de Santiago, Anna Dintaman and David Landis). My albergue for the night – “Jacques de Molay” and it is beautiful and has a restaurant. I was the first to arrive at 12:10, followed momentarily by German Peregrina, Halla. I paid €10 instead of €8 for a Camas (bed) instead of bunk bed and soon my room of four beds also included my new Japanese friends, Yoko and Teddy whom I met, checked in with and bunked by yesterday. I also paid €8 to get all my laundry washed and dried, including my sleep sack. And Johnny Irish is here, too along with the three Irish gala, Hammish from Australia and some new friends!! Life is good!!! 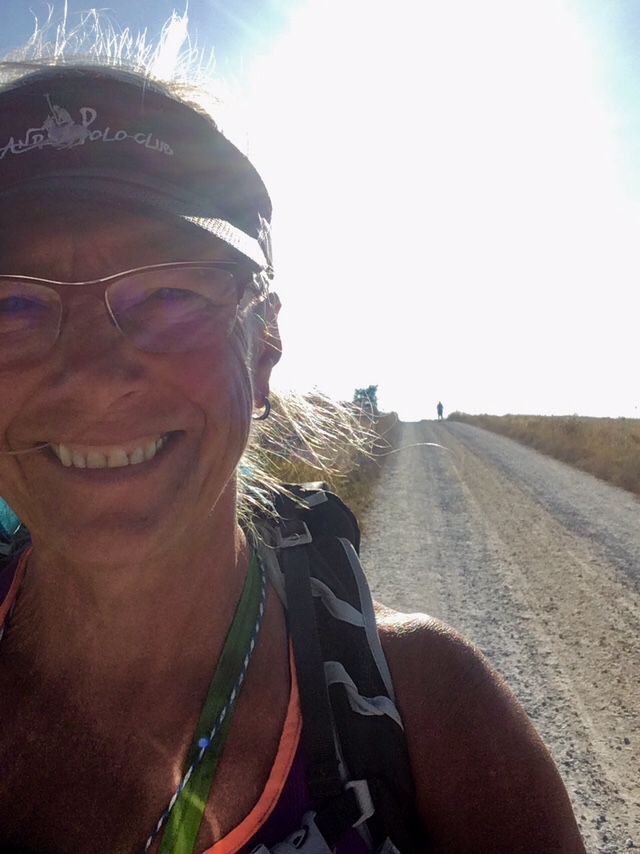