Today was a grueling day for me. Physically, mentally, logistically, philosophically and emotionally. Thankfully the temperatures started out cool and didn’t rise into the 80’s, but I had a late start and by the time I finished my 6 1/2 hour, 19.5 mile day, it sure felt like more than the projected mid 70’s.

I didn’t leave until 7:15, since I was at a hotel off the Camino a bit and didn’t want to get lost. And then I got lost – only about fifteen minutes of a diversion, though that amounted to a half an hour. 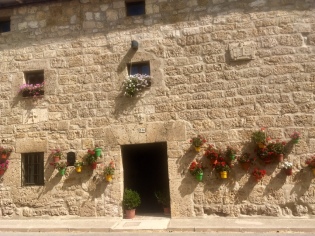 My legs were tired and I felt unmotivated- weird, since I had a lovely, private room and a beautiful bath the night before. I walked for four hours before taking a break, having my usual beef jerky and jazzed up water (M Stiks) along the way. When I stopped I was hot enough to have a caña grandé (big glass of beer) and my melting chocolaté and wilting queso (cheese) – breakfast of champions, for sure. Well that sat poorly in my stomach for about an hour, and based on my projections, nearly until the next town which I expected to encounter about ninety minutes from my respite.

I walked, and I walked, and I cried a little, and I walked, and I cried some more, and I swore – Where In The Hell Was The Town that was supposed to be 5.9 kilometers away?!??? I was all alone – my eyes could see for miles in every direction but I so No Town and No Pilgrims. Several cyclists passed me and I saw the occasional advertisement for upcoming albergues, but I did NOT see any flecha amarillas (yellow arrows). I began to think that for sure I was on the wrong road – or at least maybe one specific to cyclists. I kept thinking that I saw an approaching crest which could potentially drop into a town, but I was mistaken – about seven times. I expected blank to be within ninety minutes and then to be at my destination two and a half hours (generously) in. 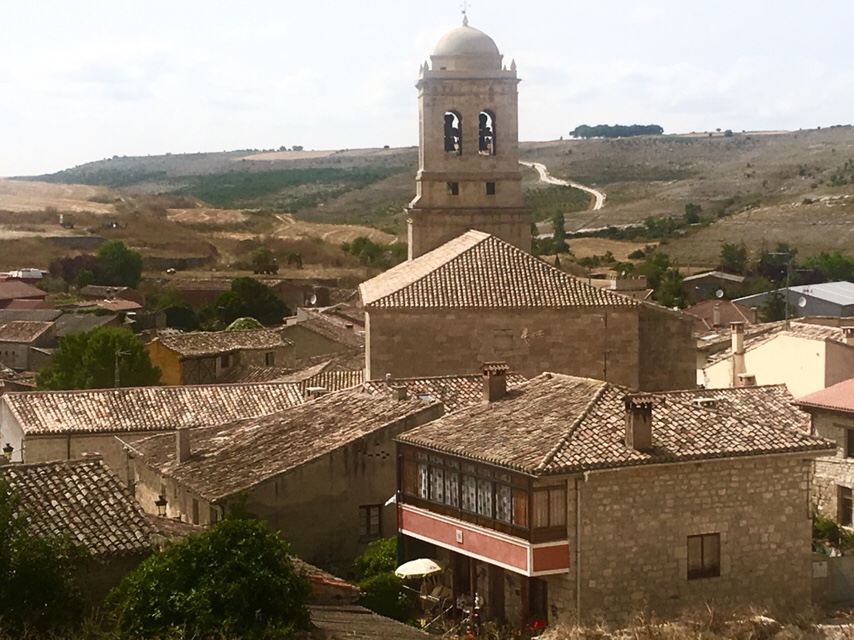 The Municipal Albergue had a sign on the door stating “closed today” (!!?!) but I was able to slip into the church across the street for some levity and peace before trudging Back Up The Hill to another albergue which had room for me to lay my weary head. Quite a gorgeous place, actually and to celebrate I had another caña grandè at the convenient, in-house bar before unpacking and showering. Plus the room I was assigned had only three bunks and it’s own toilet – Whoo Hoo!!

I had an Amazing dinner of salad, chicken paella and flan with a young man from Australia whom I had met a few days ago, a young girl from Germany, a guy from Italy maybe 40 & a Dutch man about my age.

From My guide book, “A Village to Village Guide To Hiking The Camino de Santiago” : “This Section of medieval path to Rabé was so swampy and treacherous, featured in a popular pilgrim song, ‘from Tardajos to Rabé you will not lack for troubles. And from Rabé to Tardajos, deliver us, oh Lord.” And also, “From the High Point, experience the vast emptiness of the meseta, punctuated only by bird calls and the wailing wind. Descend again via steep path known as the cuesta matamulas (‘male-killing incline’). and finally, “Just when you think it can’t possibly be any further, the trail will rapidly descend and the tower of the church of Hontanas will burst into view.”