OK, back to the Denman adventure! I left Granada on a train today at 6:35 which really meant taking a “bus” to the next station as the one here is under construction to make way for new high speed trains. It also meant getting a taxi since my destination was 4 kilometers away… Then it was off to Antequera at 8:15 to next catch the train to Madrid – a route from 9:25-11:50. This was the meet up spot with Bill!!! I left an itemized itinerary with him, and he took it upon himself to surprise me and join in on my last couple of stops of the trip. 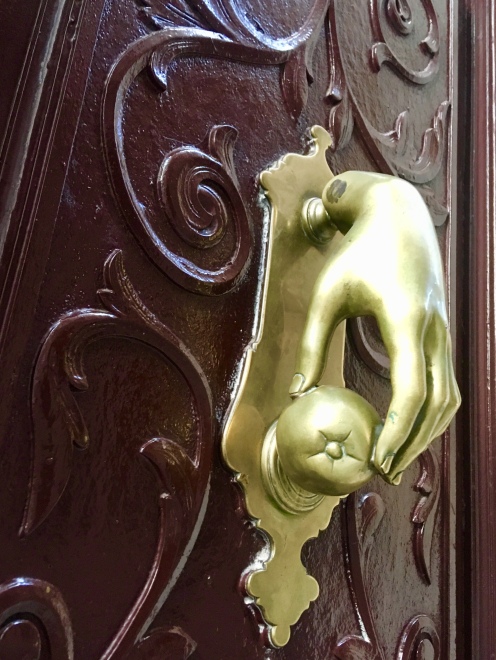 From Madrid we traveled by train to Toledo, 12:20-12:53 where we will stay three nights. Bill got into Madrid yesterday so he could rest up – no doubt anticipating needing all of his energy to keep up with me!!

Unfortunately (or maybe fortunately?) for Bill, I ran out of research time before I left and had no details about Toledo. So I couldn’t show off my organizational sightseeing prowess. Usually when we travel he is the organizer, being an avid Trip Advisor devotee. I remember being impressed enough to book a bit more time here, but I didn’t make any notes!! Well, as is par for the case, Bill did spend some time researching! He came with some lists – though no real action plan. 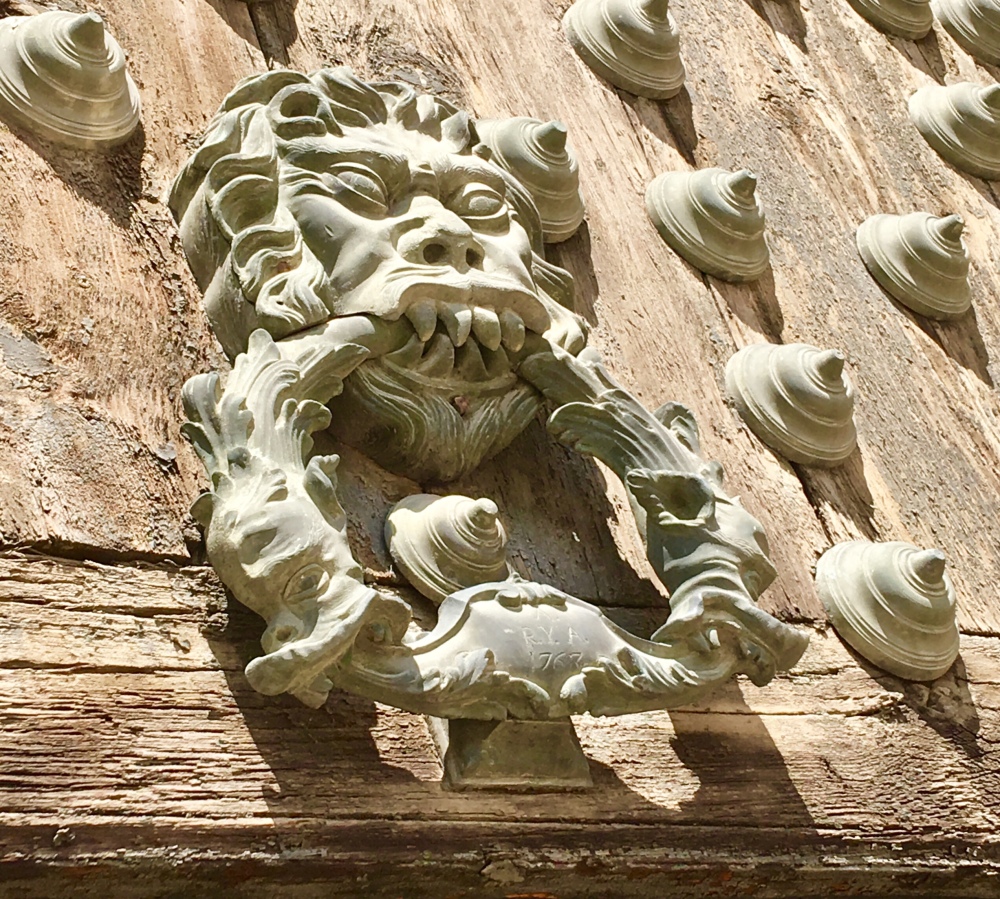 The awe started with the train station!! So beautiful with its stone and tile construction – inside and out!! In fact, some of the walls reminded me of what I had seen at Alhambra! “Railway Station – This was designed by Narciso Calveria and opened in 1920. The beautiful building uses the Neomudejar style. The shape of the building is rectangular with three sections. It looks like a Moorish palace and has many Mudejar details, such as beautiful ceramic tile and plaster moldings.” (Trip Advisor “Benny Malaga’s Travel Tips for Toledo”).  I didn’t take any pictures of the inside as we were anxious to be on our way, though I must say, I was reminded of Alhambra! 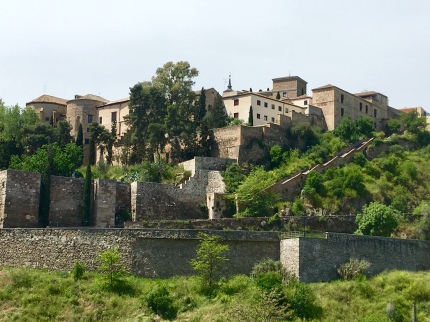 According to their tourism association, Toledo is known as The City of Three Cultures referring to the Christian, Islamic and Hebrew cultures that coexisted during centuries within its walls. Seems to me that byline could apply to several cities I have visited so I am not sure why its considered “The” city, but who am I? 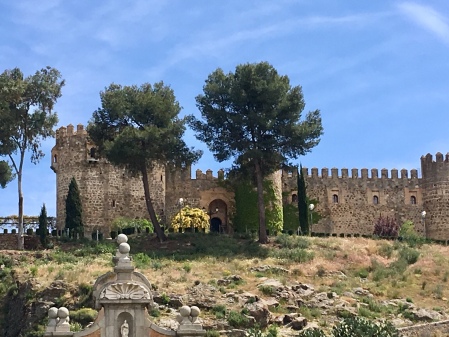 And speaking of THE CITY, “In December 1987, the UNESCO declared Toledo a World Heritage CITY in recognition of its uniqueness, as it is almost impossible to walk it’s streets without coming across an ancient mosque, a Gothic or Mudéjar church, a Romanesque or Visigothic structure, a synagogue or a Renaissance palace” (from Turespaña). A visit to Toledo is a popular day trip from Madrid as the train ride is just a half hour. 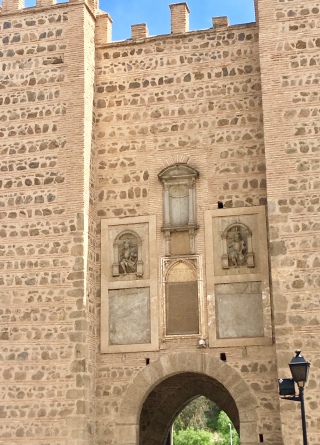 We had only to walk a short distance from the station before the walled city lay before us where it was erected centuries ago up on a hill!! What a sight to behold!! We crossed over the Tajo River and looked over at quite a long Roman Bridge (said to be longest remaining span of Roman bridge intact) as we entered the historic center through a massive arch!! More narrow, stone, steep roads spilled out in all directions and History was greeting us from every vantage point!

We were hungry so once we checked in and unpacked, we ventured out to find comida (food)! We kept walking and settled on a place that addressed our need but our enjoyment was marginal. Bill had his heart set on a bocadillo but no, those were only available earlier. I ordered the “Menu del Dia” (menu of the day) with three courses and Bill ordered just one dish – the same as I ordered for my first course – a local dish of “Pisto Manchego”. This is a mixture of green beans, diced carrots and a tomato sauce. It was ok. I thought I ordered a Toledo style chicken but instead I received a very tender pork in a stew sauce (the menu said, “chiken” – which I thought was just a different spelling, though usually chicken here is “pollo”…?) Neither our Spanish nor their English were good enough to discuss it. It came with crinkle cut fries, most likely of the frozen bag variety (very typical) and as for taste – ok. For dessert I thought I was getting a cheese tart but it ended up being cheesecake, also suspiciously the frozen box variety. There was a lively crowd on the patio and they were doing a great business, their menu boasted local fare, so it seemed like a good choice. Yet once again I found myself feeling sorry for the locals and feeling blessed for the bounty and culinary creativeness of the Pacific Northwest! 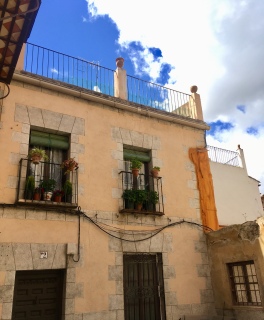 Bill may not have had an exact plan of attack, but he had some “must see” ideas and a walking tour! We had a heck of a time finding the correct calles (streets) to turn on and had to retrace our steps several times and ask directions of a few locals – something I have come to accept! Every Spanish town has its “plazas” (squares, often for congregating, but also from out of which the calles emanate) yet so far it seems as if this city has many more of them! Since the streets are identified by plaques on the building walls, at no consistent height and often several feet down the lane and sometimes not at all, in many cases we had to try multiple cutoffs from those squares as we navigated our way along. It worked out that we passed a restaurant at which we have reservations for tomorrow, a couple of others on Bill’s list of possibilities, a rooftop bar on the hit list and other noted points of interest – if we can find them again! 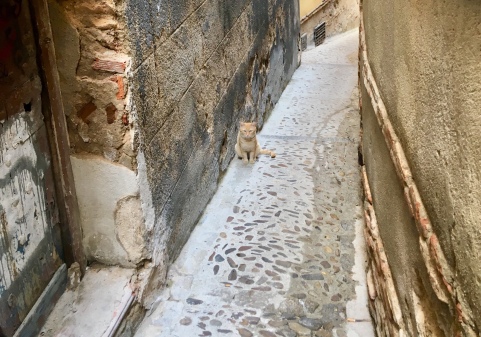 Our main destination was the Catedral and we actually paid the $10 Euros each to go in with our recorded tour and headphones. Of the big churches in all of the major cities, it seems customary for them all to claim to be the grandest. And they are BEYOND GRAND!!! As well are the smaller churches throughout this country (and I would venture – the “old world”) very glorious and grand, many open to wander into at no cost (other than a challenge to your heart) 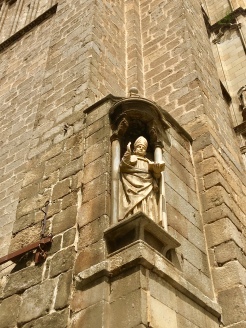 Construction began in 1226 with completion (more or less) at the end of the 15th century, and so it is essentially Gothic in style. 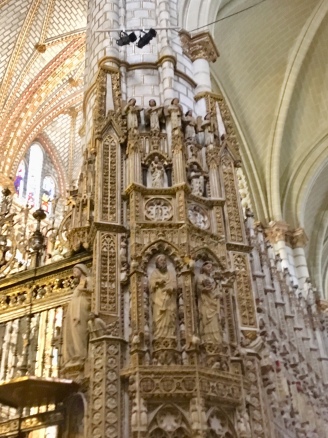 Words are so inadequate to describe the grandeur, beauty, massiveness of columns, doors and installations, the countless, extremely detailed embellishments including carved images of important people and depictions of cherished stories!!! There are always tributes to several saints and here, to many popes as well. The amount of gold used is beyond comprehension, the stained glass stunning and the pipe organs jaw dropping in every detail!!! 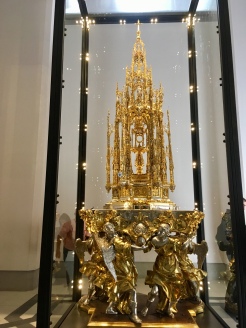 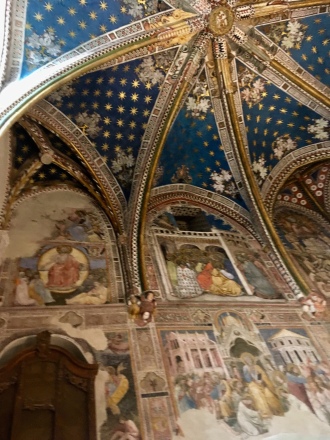 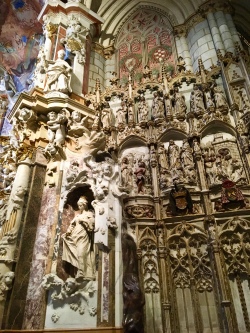 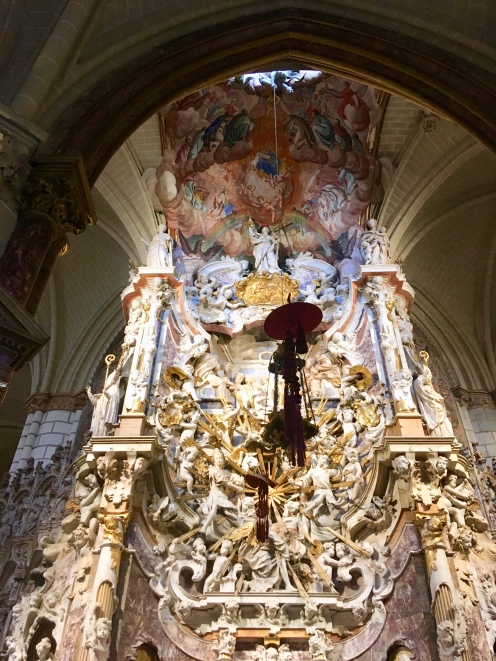 We also went into the Church of Santo Tomé, but it was so packed with people that we didn’t get all the way to the front and didn’t stay long. We were however, able to locate the artist, El Greco, and his son, which he painted into the crowds of his famous works (a tidbit shared with me by Bill), “Burial of the Count of Orgaz”

After spending a half hour finding our hotel again, we had a nice rest before trying to find a dinner spot. We had in mind, the St Agustin Market – a multi level food court. Once we found it, with the usual effort, all but three places were closed, and one of those was a rooftop bar with no food service. Ultimately we settled in on a place near our hotel and had a delicious meal and a great bottle of wine! I had Padrón peppers which I love and will order every chance I get, and grilled sea bream, a white fish served whole with a side of boiled potatoes. Bill had a salami pizza!

Tomorrow we discover more of what Toledo has to offer!! 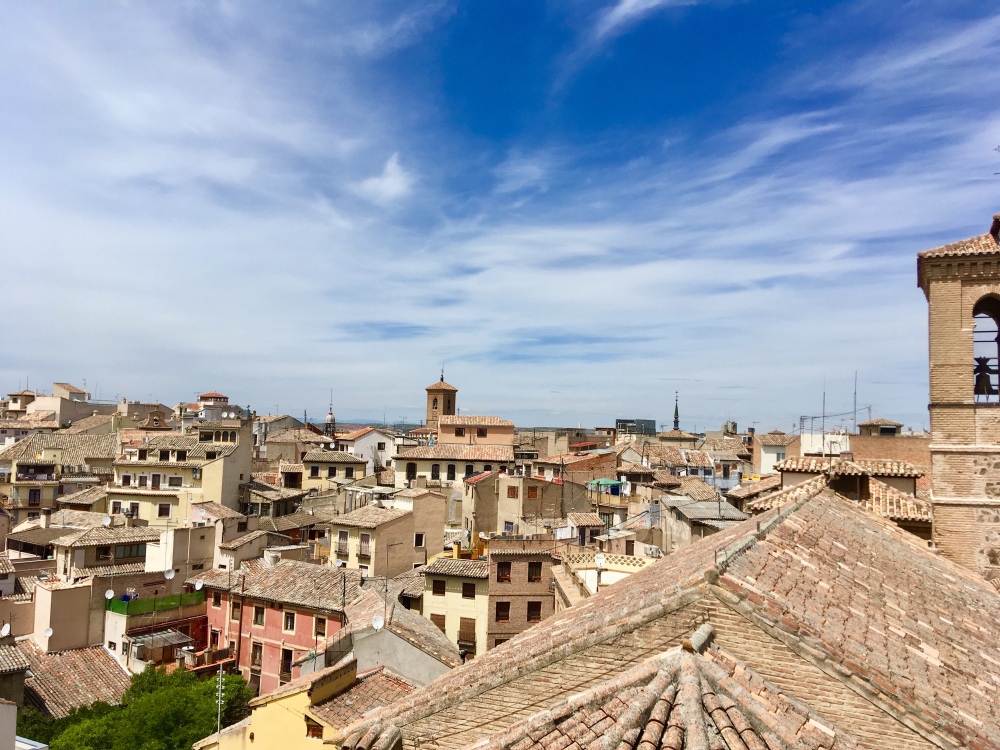